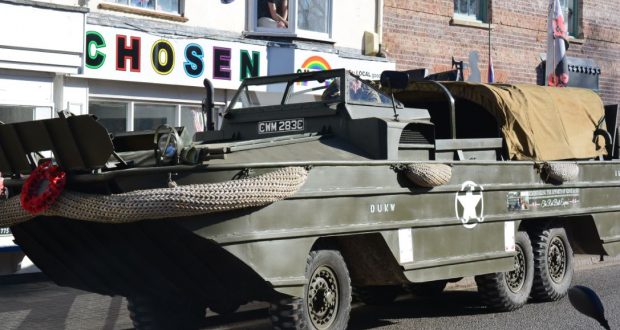 The funeral of Capt Sir Tom was held in Bedford on Saturday with only his close family in attendance due to the current COVID-19 restrictions.

In a tribute to the 100-year-old who raised £32m for the NHS, Harold drove his iconic World War Two DUKW through Holbeach to the war memorial for an act of remembrance.

Harold, of the Anglian Motel in Fleet, is a long-time supporter and fundraiser of the armed forces. Capt Sir Tom was a veteran of the Yorkshire Regiment.

Harold said: “Flowers were laid down while ‘You’ll Never Walk Alone’ was played in the background.

“A minute’s silence was held and we then played the Last Post.

“Unfortunately none of our veterans could attend due to the current situation,  but they were with us in spirit and thoughts as we showed Remembrance for the late Captain Sir Tom Moore. “