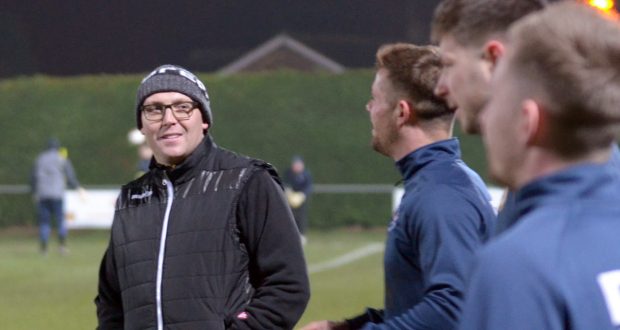 Happy Hayes eager to get started

Hayes has been delighted with the response from his players after his first pre-season with the Tigers following his appointment midway through last term.

He said: “Pre-season has been going very well. The squad is pretty much all sorted and we’ve been getting good numbers at training.

“It’s been our first pre-season with the squad and the lads have responded and are looking really sharp. Our fitness was a concern last season, but we have put that right.

“We’ve been training as a club with the first team, reserves, A team and Under 18s all together which has been really good for team spirit. There is a really good atmosphere throughout the whole club. The lads have worked really hard.”

Hayes secured the services of central midfielder Joe Smith ahead of Tuesday’s tussle with the Turbines.

Smith was with league rivals Sleaford Town last season and, according to Hayes, has made a ‘big impact on the group’ during pre-season.

“We have bedded in the new players and I can’t wait to get started.

“It will be a really tough game against Peterborough Sports, but winning games doesn’t really matter at this stage. Pre-season is about the performance and not the result. It’s all about building our fitness, getting our team shape and pushing ourselves as hard as we can.

Tuesday’s match is followed by a trip to Lincolnshire League champions Skegness Town on Saturday, July 15.

They complete pre-season with a home match against EvoStik Division One South side Stamford on Tuesday, July 25.