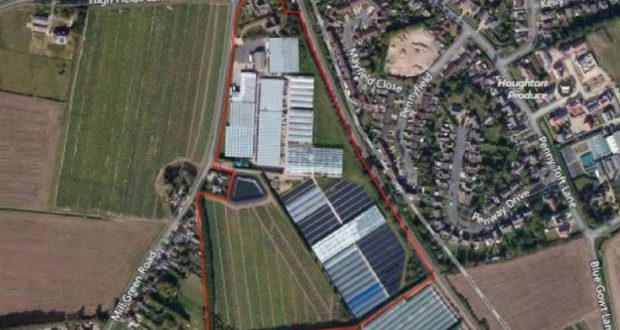 The proposed site in Pinchbeck outlined in red.

A new bid to put housing on Pinchbeck’s Nursery Fresh Plants premises is recommended for approval – albeit for 100 homes instead of the previously indicated 200.
AMJ Construction was previously refused permission to build 200 homes on the Keston Nurseries site, in Mill Green Road.
The site is located outside of the current settlement boundary of Pinchbeck as outlined in both the adopted South Holland Local Plan and the emerging South East Lincolnshire Local Plan.

In a report to next week’s South Holland District Council’s planning committee meeting, officers say: “It is not considered that there are any adverse impacts that would significantly and demonstrably outweigh the benefits of delivering 100 dwellings in this location.
“It is considered that the applicant has satisfactorily addressed the previous reasons for refusal.”

Lincolnshire County Council highways authority said the reduction in the number of houses proposed means a request for refusal of the plan no longer stands.
It said: “This amended proposal is not only for half the numbers of dwellings proposed in the original application but the submitted details provide reasoned evidence to demonstrate that the predicted number of vehicle movements on those roads, and the existing opportunities for oncoming vehicles on those roads to pass, would be such that the residual cumulative impact of the proposed development upon transportation would not be so severe that planning consent would have to be restricted or withheld.”

However, it has requested that Mill Green Road be improved.

Environmental health concerns remain regarding the impact of vibration from freight train movements on future householders, but it is no longer considered grounds for refusal.
A third  of the new homes will be required to be “affordable”. A contribution of £225,528 towards primary school provision in the form of entry expansion of Wygate Park Primary School, in Spalding, has been requested by Lincolnshire County Council.

A contribution of £25,000 per year over two years towards CallConnect transport services and a contribution of £15,000 towards Real Time passenger information functionality on the bus route are also being sought.

Peter Hull, director of Nursery Fresh Plants, said the hope would be to relocate the business, which employs around 20 people, within South Holland to a site closer to the main road where lorries do not have to go through the village as they do currently.

Ten objections have been made by members of the public but Pinchbeck Parish Council supports the plan.