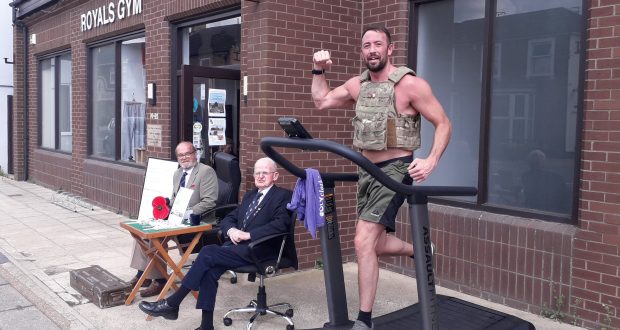 Sam Fowler during his 75-minute run, with Alan Sheppard and Peter Brown of RBL.

Holbeach gym owner and former marine Sam Fowler completed the equivalent of 7.33 miles during a treadmill run in aid of the Royal British Legion, raising than £366 for the charity.

The 75-minute feat was timed to coincide with events in the UK and France commemorating the 75th anniversary of D-Day on June 6, 1944, a turning point in the Second World War.

Once he had caught his breath after the run, Sam (31) said that he was not used to running with the additional 7.5kg carried in his assault vest for the attempt.

“My legs felt like jelly towards the end,” he said.

Alan Sheppard, Holbeach Poppy Appeal organiser, and British Legion member Peter Brown were alongside Sam as he did the run.

“Hats off to Sam! People were very generous, with one couple pulling up in their car just to make a donation,” said Alan.