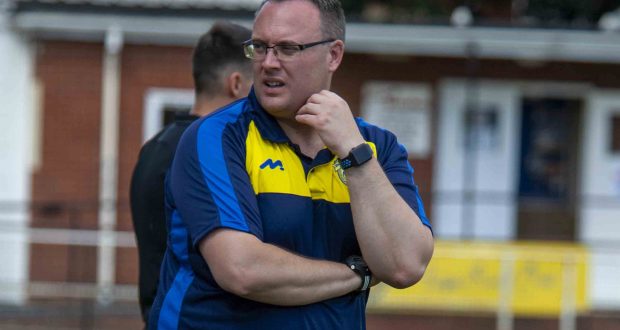 Spalding United suffered a second successive defeat in the Pitching In NPL South East Division as ten-man Ilkeston Town handed them a 2-1 reverse on Tuesday night.

Zak Goodson (6 & 54) scored in each half for the visitors at the Sir Halley Stewart Playing Field, but they also played 80 minutes with a man less following Charlie Marzano’s red card for a foul on Tom Warren.

The Tulips, who handed a debut to Michael Campbell, did rally and set up a grandstand finish when Scott Floyd smashed a sensational strike into the top corner with five minutes remaining.

But they couldn’t find a leveller, meaning that it’s now two wins and two defeats from four league games so far for Lewis Thorogood’s side.

The boss felt his side put in the required effort on the night, but admitted that they lacked a ‘predator’ in the penalty box – and intimated that he’d look to remedy that by bringing in a new striker.

“It was one of those performances that left me with mixed feelings’” said Thorogood. “The lads put in 110 per cent and the effort and work rate was great.

“But we didn’t really do enough at the other end.

“I lost count of the amount of times we put the ball in the box, but nobody was there to finish it off. We really don’t have a predator in the box.

“Ilkeston had two chances and scored both of them, which shows what a difference that can make.

“If we want to be finishing in the top five and pushing for promotion, these are the kind of games we need to be winning, if I’m honest.

“It proved hard against ten men, they worked together and made life difficult for us.

“We made the pitch wider after the break and both Ollie Price and Scott Floyd, in particular, made things happen.

“But a defensive error let them in for a second and, even though you could feel another goal coming after we pulled one back, we just couldn’t get an equaliser – which I think would have been the fair result on the night, if I’m honest.

“My big positive is that our problems are things that can be fixed. If the lads weren’t working hard, then I’d have a bigger problem.

“But I can put things right for the next game and will spend the coming days doing all that I can to bring in a new striker.

“Credit has to go to Ilkeston, though. They were clinical and their fans helped create a great atmosphere.”

Spalding are back in home action on Saturday when they host Chasetown (3pm). They then make the trip to Cleethorpes Town for a derby of sorts on Tuesday night (7.45pm).