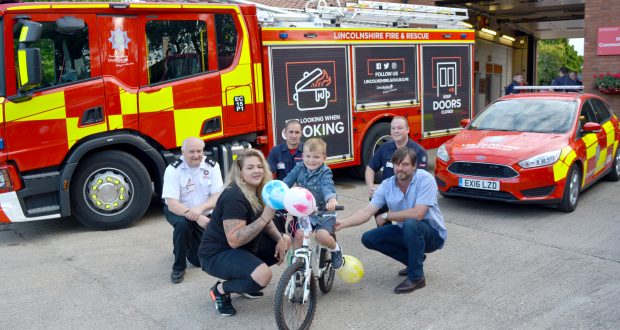 A five-year-old who had to be cut out of the bike he became entangled in is back in the saddle thanks to a generous gift.

As reported last week, George Hallifax, of Holbeach, was left a little bruised but otherwise unhurt after he fell from it and became trapped.

But the firefighters who cut him out teamed-up with JR Cycles Ricky Turner to gift the youngster a new bike.

He picked it up from JR Cycles Whaplode shop last week and was delighted.
George’s nan Helen Hallifax said: “He absolutely loves it.

“He made sure he thanked the firefighters and those at the shop personally, but we’d all like to thank them for their help and kind generosity.”

Holbeach fire crew manager John Kinder said: “We attended the incident with George’s leg trapped between the frame and the pedal, unfortunately the only way to free it was to cut the cycle and ultimately destroy it.

“George was a very brave boy, although clearly stressed and upset, he did exactly what we told him to help us in the task.

“One of the firefighters on station suggested the idea that we replace the cycle from our own station fund, I approached John Simpson at JR Cycles for a price and between him and Ricky Turner they kindly donated the bike to George through ourselves.”