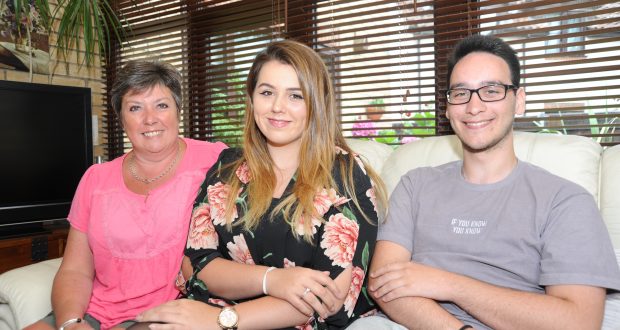 Gaby beats the pain to land a university place

A teenager battling a rare disease that has left her in constant pain is planning for university ahead of tomorrow’s (Thursday) A Level results.

Gaby Taylor (18), of Spalding, has been diagnosed with type two a-typical trigeminal neuralgia, a chronic pain disorder brought about by a faulty nerve.

It means she has constant pain that includes daily attacks so strong it leads to vomiting, symptoms she’s had since before her A-Level mock exams in March 2017.

Despite this she’s predicted to get an A* and two A grades in the A-Level results announced today (Thursday) and has an unconditional offer from De Montfort University in Leicester to study psychology.

To combat her disease, which usually only affects older people, Gaby threw herself into revising, her notes proving so impressive to teachers at Spalding Grammar School that they’ve been published online and can be purchased on Amazon.

She was also awarded a special Governors’ Award by the school.

Gaby’s full of praise for the school as her condition often leaves her unable to even share a room with others – she even had to sit exams on her own at a temperature she was comfortable with.

Exposure to something as simple as a slight breeze or air conditioning can set off the most severe of pain attacks she likens to have a screwdriver behind her eye that occur on either side of the face.

“It was in March last year when I just woke up in pain,” she said of her first experiences of trigeminal neuralgia: “It was like that every day for a month.

“It just felt like I’d tipped an entire bottle of shampoo in my eye.

“It can be anything that sets off the pain attack from the wind to being touched on the head.”

Because Gaby’s condition is largely invisible it wasn’t diagnosed until June 2017 after several doctors had told her it was migraines.

She even had two teeth pulled out in case they were the problem.

Even the strongest pain killers of the likes handed out to mums in labour failed to have much effect.

There’s no definite cure for the condition and operations on the faulty nerve bring a high risk of leading to facial paralysis.

Medication has had little effect or left Gaby exhausted or subject to mood swings.

Gaby admits learning that knocked her back.

“It was a real shock to read the words suicide disease,” she continued. “I’ve been in pain every day since and that gets really tiring and brings you down.

“I’m lucky I’m quite a happy and bubbly person.

“After more than a year of living with this I’m more determined than I’ve ever been and I now don’t take anything for granted.

Gaby’s determined to not let it ruin her life and the talented hockey player is back in goal for Spalding Hockey Club.

Having been selected to represent both the county and region, she had wanted to go to Loughborough University to study there and play hockey.

De Montfort has been chosen instead as Gaby’s sister Harriet and several friends will be studying there and her boyfriend Dan O’Connell (18) will hopefully be studying at Loughborough.

Gaby added: “I always have made goals so I just thought I would get something out of this position and revise as much as I could to get to university.

“Finishing the revision and exams was just the best feeling.

“The Grammar School were really brilliant.”

Gaby has to look to keep her face as warm as possible.

That means for the likes of mum Bev Taylor and boyfriend Daniel, no air conditioning wherever they are, even in 30 degree temperatures.

Gaby even has a balaclava on hand to ease any burning sensations.

Despite these adversities, Gaby is determined to lead as normal a life as possible.

“The worst part for me was the diagnosis and feeing of total helplessness but we’re so lucky it was diagnosed early.

It’s great to see how she has handled herself and her positive attitude when a lot of people would have crumbled.”

Dan said: “She’s been helping me and our friends with revision and it’s made me really proud that she’s doing something to help her keep her mind off things.

“It’s been hard seeing what’s she’s gone through and vomiting constantly but she’s been incredible.”