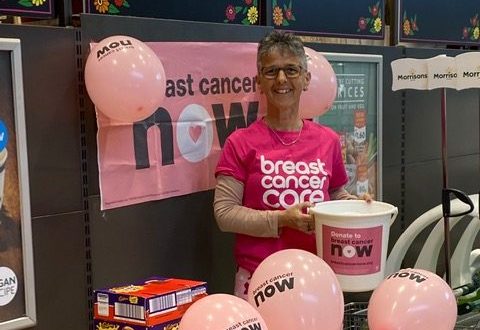 Nearly £3,000 has been raised in memory of a Weston woman who died in a road traffic collision

Teresa Walton (55) had spent the last two years raising money for Breast Cancer Now after being diagnosed with the condition following a routine mammogram in July 2019, just two days after her son Sam got married.

She was given the all clear on New Year’s Eve later that year.

Teresa told The Voice in 2020 of her cancer treatment: “I was helped by so many friends and I couldn’t have got through it without them.”

Since then she’d taken on numerous fund raising efforts for Breast Cancer Now including the Great North Run virtually alongside friend Sarah Willoughby and cycling 300km throughout last March.

Teresa was named locally as the cyclist who died following a collision with a tractor pulling a trailer shortly after 5pm on Tuesday, October 12 on Fengate Drove in Weston Hills.

Son Sam said on social media: “Teresa Walton I will miss you sorely for the rest of my life.

A fundraiser was set up by family friend Danny Inglis, initially to cover costs for the funeral.

As that’s already sorted however the family have requested the fund continues Teresa’s charity efforts.

“We are lucky enough to have things in place for the funeral so we would like anything that is raised to go the Breast Cancer Now charity that mum loved raising money for,” Sam said. “For her to keep raising money after her passing would mean so much to her.”

Danny a friend of Sam’s spoke warmly of Teresa and her husband Terry saying: “I just wanted to do something for them as they’re a lovely family who I’ve known for years.

“Sam has said they’d like to continue to fundraise for Breast Cancer Now so the money will go towards that.”

The Go Fund Me page is www.gofundme.com/f/for-terry-sam-dionne-and-dottie Teresa had worked for Wilkos in Spalding for many years.

A memorial was erected in the Holland Market store this week and a day of fundraising for Breast Cancer Now is planned for this Saturday.

“Teresa was a valued and cherished member of our Wilko family, we are devastated by her tragic loss, and we send our heartfelt condolence to her family and friends .

“Teresa touched so many lives, with her own health battles that she overcome and her relentless efforts raising money for breast cancer charities.

“We will miss her greatly and we send our sincere condolences to her family and many friends during this tragic time.”
Lincolnshire Police have appealed for any witnesses to the incident on an unadopted road between Fengate and Moulton Chapel Road.

A police spokesman said: “We would like to speak to anyone who witnessed the collision or who saw either the green tractor and trailer or the pedal cyclist in the area around 5pm.

“We would ask drivers who have dashcam and may have caught either vehicle or cycle to check their footage.“

Anyone who has any information is asked to contact police by email at force.control@lincs.police.ukor by calling 101.

The fundraiser is here.