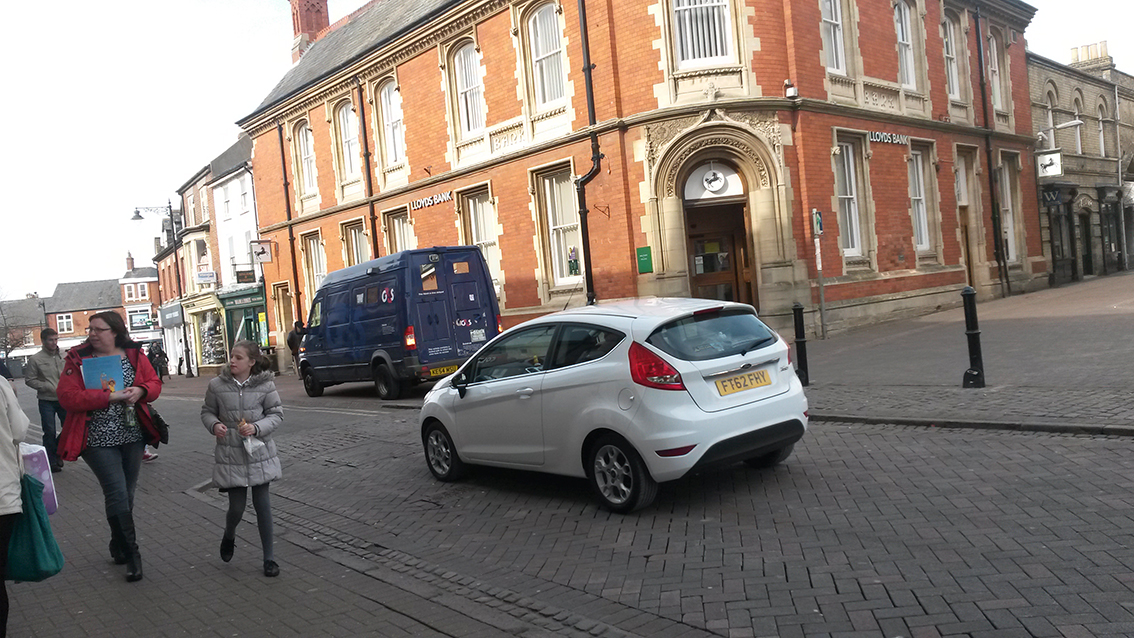 A scene in Market Place and Hall Place on Thursday lunchtime last week. The photograph is intended as an illustration only and not a suggestion that the car was not permitted at that point.

But the very least that Spalding Town Forum wants to see is businesses in the pedestrianised area reminded about their responsibilities in regards to the traffic order.

The vast majority of vehicles are banned from using part of Broad Street. Hall Place and Market Place from 2am to 4pm on Tuesdays and Saturdays (market days) and 10am to 4pm on all other days except Sunday.
However, there has been increasing disquiet about drivers and cyclists ignoring – or not realising – the traffic order which was introduced 20 years ago.

It’s long been a bugbear to Coun Roger Gambba-Jones, who was vocal about the issue again at the town forum’s meeting last week – and rounded on businesses which do not pay heed to the restriction sign at the junction of Herring Street and Broad Street.

“The county council ought to be writing to all those people who regularly ignore that sign to remind them what that sign says,” he said. “I’m sorry to say that British Heart Foundation is one of the worst transgressors. They have no dispensation [under the traffic order to carry out what they do.”

Coun Christine Lawton said some errant drivers she has spoken to claimed not to have seen the sign.
“What we need are clear and proper signs so people can’t say they didn’t see it,” she added.

The idea of Spalding Into Town buses being re-routed to include the pedestrianised area was proposed again by Coun Angela Newton.
She said: “I’d like to see the town bus go through there, but I know a lot of people don’t. I think it would be good to see people being brought right into the town centre to spend their money.”

The meeting heard that drivers and cyclists who flout the restrictions could soon be dealt with by PCSOs as well as police officers.
And Spalding community policing inspector Jim Tyner said he also expects the advent of improved CCTV to help identify offenders.

Coun Graham Dark wondered about the possibility of having a reactive sign.
“One saying ‘no entry’ so if vehicles approach it, it flashes that up,” he said.

The suggestion went down well and forum chairman Coun George Aley suggested councillors might contribute from their members’ designated budgets. He estimated the cost to be about £1,200.

The forum agreed to investigate more prominent signage and ask Highways to write to businesses.