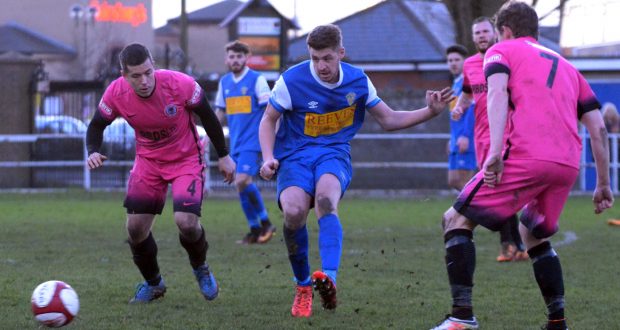 Although not adding any further goals to their tally in the second period, Chris Rawlinson’s side forced a hat-trick of top class saves from Leek keeper Ben Chapman, including a stellar stop to keep out Lee Beeson’s penalty.

After an evenly-fought opening 20 minutes in which both goals had been tested, leading scorer Wells set the Tulips’ hearts pounding with a superbly-taken opening goal on 25 minutes.

Playing the simple stuff with neat passing from deep in their own half of the field, Beeson threaded a perfect ball through to Wells – just beating the offside trap – who ran through to glide the ball past a wrong-footed Chapman.

Three minutes later home fans were stunned into silence once again. Acar and Wells combined well down the left side and Lemon homed in on Wells’ final pass to nonchantly turn the ball just inside the near post to extend the Tulips’ lead.

The dust had hardly settled before the visitors’ advantage was further extended.

On his return from suspension, Whitehead highlighted a man-of-the-match performance with a goal of stunning quality.

He let rip from 30 yards out and the ball, taking a slight deflection from a Leek player’s shoulder, looped up and over the despairing arms of keeper Chapman into a top corner of the target.

Leek, who had beaten the Tulips 1-0 at the Sir Halley Stewart Field back in mid-October, were now heading for their fifth league defeat on the bounce.

But to their credit they continued to battle bravely on and were near to reducing the deficit when Rob Stevenson’s free kick was just off target.

However, they were hit by a fourth Tulips’ goal as the opening half edged into added time. Acar, who had been involved in a private battle with Leek’s Danny Smith, finally managed to get past his marker to cut into the six-yard area and cheekily flick the ball in at the near post.

With such an advantage, the Tulips were able to relax to some extent in the second half but without losing their overall control against a home side who gallantly battled to the final whistle without unduly testing keeper Michael Duggan.

At the other end, Chapman superbly saved Beeson’s penalty, palming the ball onto the underside of the crossbar and then hugging the ball to his chest on the rebound.

It mattered little, with the Tulips full value for a very impressive success.