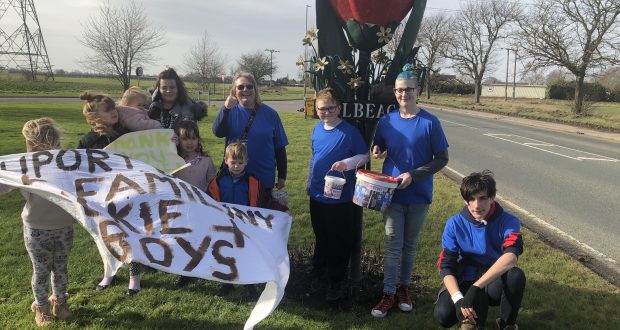 A Pinchbeck family whose 19-month-old daughter was recently diagnosed with leukaemia have received a much needed boost thanks to a foster family’s charity walk.

Kaylee and Luke Portor say they knew something was seriously wrong straight after daughter Destiny’s birth, but only received the partial diagnosis three weeks ago.

Health officials have said they believe Destiny has other conditions, so the family are currently waiting on further test results and for a bone marrow transplant.

“I don’t know if one day I’ll wake up and she’s not going to be here anymore,” an emotional Kaylee told The Voice. “We’re now on more waiting lists after waiting long enough to even get any diagnosis.

“We can’t wait much longer.”

Kaylee says that from the moment Destiny was born she was very sleepy, quite yellow and there was a lump on her head but that they were told she would be fine.

After developing four more lumps aged three months, she had an MRI scan but the diagnosis was they were cysts.

Last month though she was diagnosed as having fluid on the brain.

Destiny is due another MRI scan in March but was rushed into Peterborough City and Addenbrooke’s hospital after Kaylee said she’d told health workers her orange complexion was not because “she ate a lot of carrots”.

There it was discovered that Destiny’s bones weren’t absorbing iron.

It’s been a particularly tough time for the Portors as due to COVID-19 restrictions only one of them has been allowed with their daughter while the other looks after their other five children.

The leukaemia diagnosis has come as a shock but the pair are still waiting to hear back from a host of other health specialists including brain neurologists and bone specialists.

Kaylee says Destiny has always been behind with her learning.

“She’ll play for ten minutes but then will seemingly be in pain.

“She only started to crawl aged 14 months and we don’t know if she’ll walk.

“She did have a blood transfusion in hospital and for two weeks she suddenly had much more energy and wanted to crawl everywhere.

“We were so happy seeing her like that, but it only lasted for two weeks.

“It’s heart breaking. We’ve been trying to think if there’s anything we could have done differently, but it feels as if there’s nothing we can do.

“We don’t know what to do. You just want to cry and scream.”

Help has come from the community including from family friend Jackie Tillbury.

The Moulton Seas End resident is used to acts of kindness; since 2000 she’s been the foster mum to 15 youngsters.

Last Saturday she and her three current foster sons Brian (18), Lennon (15) and David (11) all took part in the walk after donating their own pocket money.

“It was very tough and felt like longer than ten miles,” said Jackie who knows Kaylee’s family. “But the reaction from the people around us was fantastic.

“One young lad stopped their car, ran over to us and put £5 in the bucket.
“Everyone’s been touched by Destiny’s story.

“The boys straight away gave all of their week’s pocket money to cause.

“A number of my friends have crocheting and knitting clothing for her.

“They’ve also bought toys for her including a bumper car to help her try and walk as they’re worried it might be something she might never do.”

“It was great to see Kaylee and her family on the walk.

“She was just over the moon and in tears and said how grateful she was for everything.”

“It was a wonderful what she’s done. I can’t thank her and her friends and family enough.”

You can donate to Jackie’s appeal here.