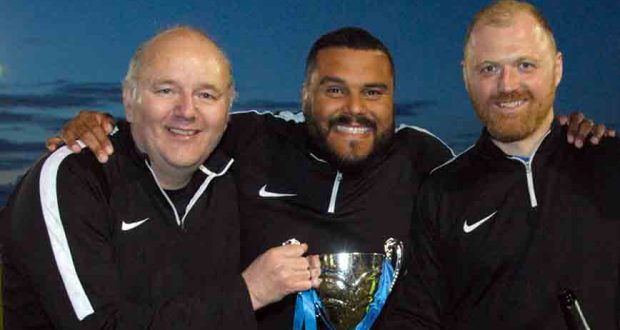 IN HAPPIER TIMES: Gary Coomes (left) and Allan Ross (middle) with Ian Dunn after winning the UCL Division One title with Pinchbeck United back in 2018. Photo by JAKE WHITELEY

As one of the most prominent figures in Pinchbeck United’s recent history, Allan Ross was looking forward to seeing some old friends when he revisited the club on Saturday.

But instead of enjoying his afternoon watching the Knights take on Lutterworth Town at the Sir Halley Stewart Playing Field, the popular former assistant manager left at half-time after being racially abused by a home ‘supporter’.

Ross alleges that he was called a “wog” by a long-standing follower of Pinchbeck, who he also claims had used racist language in his presence during his lengthy spell with the club that ended back in November 2019.

The now Horncastle Town manager also vented his disappointment that Knights chairman Gary Coomes, who he claims was with him when the racial slur was uttered, didn’t step in immediately to eject the supporter.

Ross went home and contacted the police, who spoke to Coomes about the incident after the game, but was left disillusioned by their apparent decision to take no further action.

Coomes confirmed to The Voice that he heard racist language but was at the time unsure of the context it was used in and if it was actually aimed at Ross – and Pinchbeck have since released a statement confirming that the fan, who is a man well-known to all at the club, has been banned from attending their games in the future.

But Ross, who admits he was in tears about the incident before receiving a call from Kick It Out’s Troy Townsend on Monday, feels the need to speak out about his experience as he bids to help other black people who have suffered similar abuse.

“I was very upset on Saturday,” said Ross. “This fan, who called me a ‘wog’, has been in and around Pinchbeck for a long time.

“It’s not the first time he’s been racist and, if I’m honest, he was one of the reasons I chose to leave the club last year after a really successful period of time.

“I’ve always felt respected and liked by Pinchbeck and the people there. But this is not a football issue, this is racism.

“Gary, up until Saturday, was somebody I classed as a family friend. I’m devastated that he heard obvious racism in my presence and didn’t back me up. If you hear racism as a football chairman, I’d hope that you’d use your power to eject the person immediately.

“I was there to wish the club well in what was their first game under new manager Lewis Thorogood and felt both excited and safe to be going back to the club.

“But what happened has left me feeling let down. It initially made me feel embarrassed to be a black man and left me deeply upset.

“I did the right thing and called the police, but when they are telling me there is nothing they can do it left me wondering how I’m supposed to educate my kids on how they are to deal with racism.

“After speaking to Troy, he has inspired me to highlight my experience and to try and help others who have been in my shoes. Hopefully by speaking up and sharing my experience, other black people won’t feel as helpless and powerless as I did on Saturday.”

Pinchbeck chairman Coomes, who condemned the alleged racism, says that he feels “devastated” by the incident and isn’t sure what more he could have done to diffuse the situation.

He claims that he stopped a “volatile altercation” between the two after the racist slur was used and that the fan was at the Sir Halley Stewart to drink at Tulips Social Club, rather than to watch the match.

He then moved to ban the fan after the game and is upset that Ross hasn’t taken his calls since the incident took place.

“There is no excuse for this kind of language at football or in society,” said Coomes. “I can understand that Allan is upset, but I don’t know what more I could have done.

“There was a volatile altercation between the two afterwards and I did my best to break it up, then both parties went their separate ways.

“After the game I spoke to the police and the Lincs FA. We moved to ban the guy from all matches involving the club moving forward and are hoping to get him banned from Knight Street and Spalding United games.

“It’s regretful that the police haven’t done more and we at Pinchbeck United don’t condone any kind of racism. To be honest, the entire episode has left me devastated and considering my future in the game.”

A spokesman for Lincolnshire Police said: “Incident 285 of October 31 refers to a report of racist comments being made following a local football match being held at the Sir Halley Stewart playing field.

“The investigation is ongoing. No-one has been arrested at this time.”

On Facebook, Pinchbeck United posted the follow statement: “Pinchbeck United have been investigating a racial incident at our game on Saturday 31st Oct vs Lutterworth Town.

“The perpetrator of this incident has been banned from all of our games and was informed of this on Saturday.

“Pinchbeck United will not tolerate any racial abuse of any description and will continue to work with all parties to resolve this issue. No further comment will be made.”