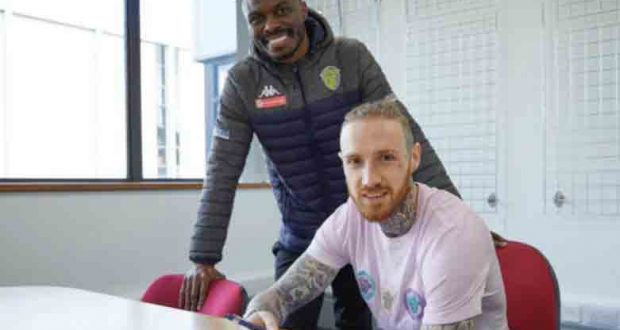 MAKING WAVES: Gaby Zakuani, pictured when signing Marcus Maddison, is pleased to have Jacques Maghoma training with his side.

Spalding United have secured another pre-season boost after Jacques Maghoma agreed to train with them.

Midfielder Maghoma, who is a DR Congo international like boss Gaby Zakuani, has made over 300 Football League appearances for Burton Albion, Sheffield Wednesday and most recently Birmingham City.

He joins the Tulips’ pre-season squad, though, after a spell with Indian Premier League side East Bengal.

The 33-year-old former Tottenham Hotspur academy talent was Birmingham’s player of the year for 2017/18 and will be a positive influence for Zakuani, who has also brought Marcus Maddison to the Sir Halley Stewart Playing Field this summer and enticed Yannick Bolasie to train with them.

It is expected that Spalding will help Maghoma regain his fitness and perhaps get game time, much like they did with ex-Premier League striker Nile Ranger last season.

Zakuani said: “Jacques has been with an Indian Premier League side recently. Now he’s back and looking for his next challenge, I look forward to introducing him to the squad at the weekend and giving him the next step on his journey.

He has lots of ability and I am sure he will keep developing further.”

The Tulips have also added a game at Deeping Rangers to their schedule on July 24.