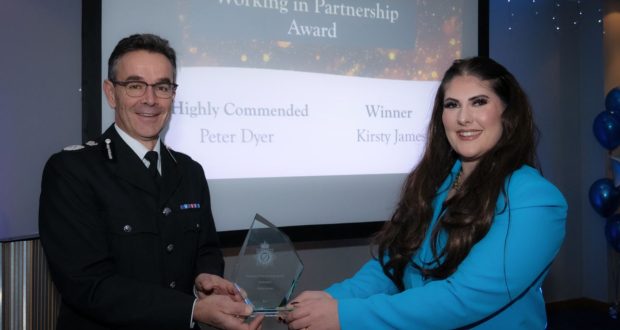 Two of Lincolnshire Police’s staff based in Spalding were among those picking up awards at the force’s annual recognition of its staff.

Risk management officer Kirsty James won the Working In Partnership award for her help with a vulnerable individual and Constable Philip Mcallister was awarded the Certificate of Chief Constable’s Commendation with Star for helping rescue David Anthony after his car fell in icy water in Pinchbeck last year.

PC Mcallister, who is nominated for a Police Bravery Award, the finals of which are tonight (Thursday), was described at the awards “as a dedicated and committed officer and his brave and quick actions on the night saved a life.”

Kirsty has worked in Spalding and Grantham since January 2015.

A force spokesman said: “Her level of commitment and tenacity to the role is exceptional, since January 2020 Kirsty has been working tirelessly to address issues with one particularly high-risk offender.

“Through her tireless determination and dedication Kirsty eventually secured proper housing for the individual, which has resulted in no repeat anti-social behaviour issues or public order offences and has led to a better standard of living and mental health status.

“Kirsty is a dedicated, committed and passionate member of staff.”

Other winners on the night were the Safer Roads Team landing the Lincolnshire Police Public Service Award, Inspector Colin Haigh being given the Making a Difference Award for his work as part of the force’s wellbeing programme and a Leadership Award for Detective Chief Inspector Jennifer Lovatt, particularly for her work with the Digital Forensics, Imaging, Cyber Crime, Covert Authorities Bureau and Digital Media Investigations.