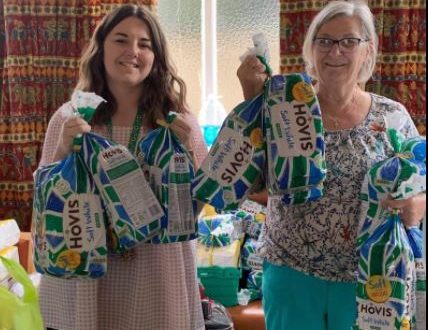 Rocketing energy costs, the reduction of Universal Credit and the ending of the furlough scheme are all combining to add pressure to foodbanks in South Holland.

With increases of up to 70 per cent in the price of energy, some families will be choosing whether to heat or eat this winter, with more using voluntary foodbanks to help them get through.

South Holland foodbanks are anticipating a sharp rise in demand as a result and fear that many more families will be relying on them in the coming months. More than 5,000 people in the district claim Universal Credit.

The Crowland Community Larder has been running for around a year and is regularly helping between 60 and 70 households.

“There is still a great need and with the rising prices people will be wondering about turning on their heating or eating. We are anticipating a huge rise in demand because of the energy costs,” said organiser Laura Beeken.

In Holbeach more than 1,000 people had been helped by the end of September and organiser Gill Rogers said the impact of the pandemic had been clear for all to see.

“We are seeing a steady three weeks and a fourth week peak – it seems to be the time when Universal Credit is due so people are clearly not managing,” she said.

A delivery service by the larder is having to be scrapped as rising fuel costs are hitting volunteer drivers, but the Community Cafe is opening again on Friday with the larder expanding and also opening on Friday for an hour.

In Spalding, the Agape community larder is seeing at least 30 people a week and the numbers seeking emergency parcels is growing.

Co-ordinator Irene Davies said they were preparing for a tough time ahead.

“The high cost of rental doesn’t help either. Trying to find a deposit and a month’s rent up front doesn’t leave anything for food,” she said.

The Crowland larder also provides emergency parcels with everything from pet food to toiletries along with a fortnightly shopping list.

But it’s feared some people are missing out because they are too embarrassed to make contact and collect.

“I have taken phone calls from people needing help who are worried about collecting from us and being seen.

Everyone has an appointment and nobody sees anyone else,” said Laura.

With Christmas not too many weeks away, the organisers are sorting hampers.

“Last year we had people queuing around the church. It has been a lifeline and we are still keeping some people afloat,” said Irene.

“We are taking more referrals now than we were and we are prepared for what’s to come,” she added.
Holbeach larder is also preparing now for Christmas and hopes supporters will once again be generous.

“I always say we are the best kept secret in Holbeach. We don’t want people who might need us to not know we are here and that we can help them.”

All the larders are happy for donations of colouring books, crayons or pencils for children. And if anyone has nice toiletries, they would also be welcome to add to hampers.

The organisers of all three banks said they were grateful for continued support, both for food donations, cash and those volunteers physically helping out.

“My heartfelt thanks go to all our volunteers and anyone who supports us. We would not be here without them,” said Laura.

“We are also grateful to Morrison’s in Bourne for donations of fresh food.”