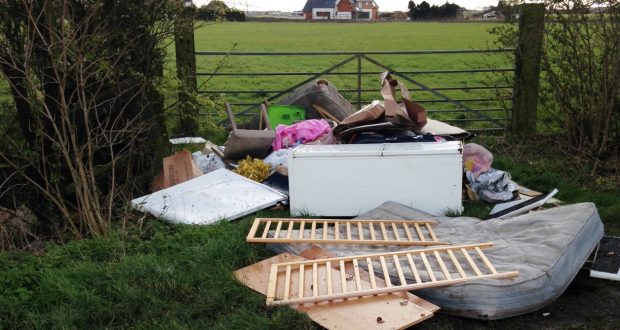 A fly tip in the area.

Targets to remove reported fly-tips in the area are not being met due to a contractor not always being available, it’s been claimed.

South Holland District Council aims to have all fly-tips reported to it cleared within an average of five days.

However from April to June it took 6.1 days to deal with a report, up from 4.7 in the same period last year and 5.2 days in the three months immediately previous.

While the authority was meeting or exceeding its targets in most categories, panel members expressed concerns over not meeting the fly-tipping target.

Its chair Bryan Alcock, said: “It’s good to see the ones that are improving and fortunately they make up the vast majority of the indicators that we are performing as an authority well which is good to hear.

“It’s disappointing about fly-tipping because that’s one of the services that members have been extraordinarily concerned about.

“Are we taking any action to fill those voids when they’re not available because if we’re not doing that I suspect we need to recommend the thing is looked as to whether they’re an appropriate organisation to do it.”

The district council outsources its fly-tipping collection to a company called Fly Swat.

Corey Gooch, senior change innovation and performance business partner said of the 6.1 day wait: “Largely this is due to the Fly Swat service we use not having the right provisions available or the support to enable them to go out and collect.

“This is something beyond our control and we’re quite limited to what we can do.

“That being said we’re monitoring it closely and continuing to review if the scheme is best for us.”

Charlotte Paine, the council’s environmental services manager, said: “We are actively monitoring to see what is the best way forward.

“It is a reduced cost service so if we were to do it ourself we are checking to see what the cost would be in comparison.

“One of the other issues we have is that sometime the location isn’t quite accurate so it isn’t always down to issues of who’s available. We’re working on that as well to make sure all reports are well located so that we can collect them as quickly as we can.”