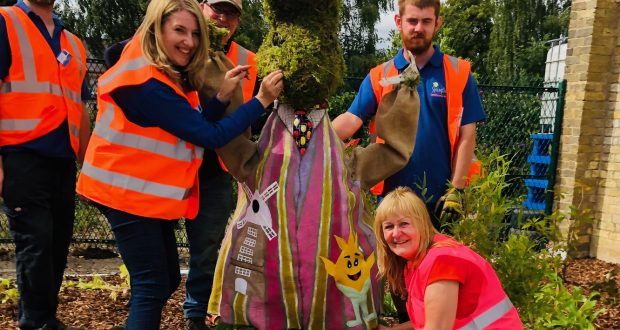 A remnant of Spalding’s historic Flower Parade has been erected to brighten up Spalding station.

The volunteers that have taken it upon themselves to spruce it up have teamed up with Springfields and the Springfields Horticultural Society.

Not only have they provided plants for the flower bed, but they’ve also provided the moss covered rabbit that’s been christened Tulipa.

Jan Whitbourn has been among those creating the eye-catching attraction.

Here’s her Tulip Talk column for this week:

The Flower Parade is being depicted at Spalding’s Railway Station with a rabbit formerly used in it sitting pretty, decorated in a flowered jacket and looking amazing.

During the Spring Flower displays at Springfields Festival Gardens, the metal structure was featured as ‘Alice in Wonderland’ for the ‘Tulipfest’.

The shopping outlet has been wonderful in helping us to decorate one of the beds at the station using the theme of the Flower Parade for inspiration.

CEO of Springfields Horticultural Society David Norton visited the site to see how they could enhance and portray the much missed celebration.

His idea of a structure to be displayed at the station was to create a visual representation of the ‘Flower Parades’, along with a design of the coat around a photograph and memory of it in a field in Lincolnshire with tulips on it and Moulton Mill set in the background.

Tulipa, as the rabbit has been christened, represents ‘the hand of friendship’ by giving out tulips, being the face of ‘The Flower Parade’.

Melissa Reid, from Stitch Witch created the bespoke designed hessian coat along with a design concept by David Norton, requesting that it reflect the tulip fields and include Moulton Mill.

‘Tulipa’ was set at that time, bringing a sense of history and purpose to the overall design. David wanted the colours on the hessian to reflect the colour of tulips in the fields, as per historical photos while the coat was created and stitched into place by Melissa who named him ‘Pfizer’ from Watership Down.

It pays tribute to the Flower Parade, the last field of tulips and a hand of friendship by way of Tulipa.

Andy Boynton and the garden team from Springfields visited the station and understood the requirements needed to ensure that plants, trees, shrubs, and flowers were the right ones for the garden area and over a period of time would grow and flourish in a way that would add a sense of interest to the area.

Many plants were purchased but some were grown from seed and planted in membrane and bark to create a tidy and easily, manageable area for the station.

They also purchased plants for the remaining garden beds.

A massive thank you must go to David, Andy, his team and to Inga Maxwell, for their time and for all the work that went into putting this together.

The gardens are beginning to look amazing, the plants we have been given by many organisations are now flourishing and it feels good to be part of this project and to be able to see visually the prettiness of the garden coming into shape.

It felt great to be working on the rabbit. It took me back to my flower parade days when pinning thousands of tulips onto structures, only this time it was moss.

Thank you to Anthony and Linda Casson for coming, a couple of times a week, to help me water all the plants, it takes forever but your company makes it worthwhile. Also to David, if it wasn’t for him, filling up the water butts, the plants and shrubs would not be like they are today.

A big thank you must go to Wendy Martin and her son who took plants from their garden, potted them up and brought them to the station to be planted in the gardens.

Thank you, all plants are gratefully received and added to the four beds which are amazing. 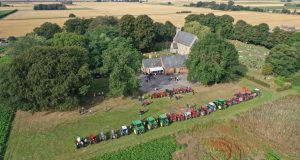 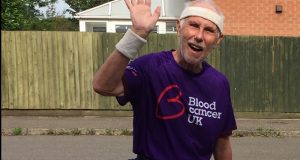 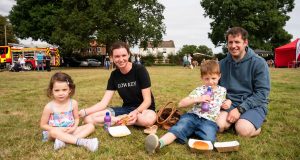