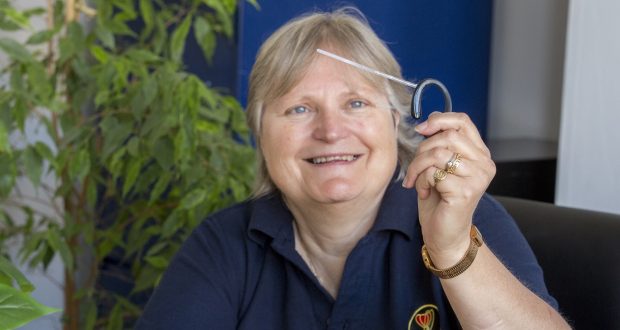 Sandra with her invention.

Fleet inventor is ‘no longer afraid of Parkinson’s’ after breakthrough

A Fleet inventor is looking to create a centre of excellence into the treatment of Parkinson’s in Long Sutton after her invention that’s improved her life and that of others with the condition officially launched.

Sandra Mcdonough had to retire from her role as a payroll clerk aged 37, but now aged 59 she’s launched her first business after inventing a device that’s allowed her to regain control of her body.

The Eye Guide MC, which Sandra invented at home, sits unobtrusively over the wearer’s ear, like a hearing aid does.

It contains no batteries, no wires, no plugs and requires no surgery to fit. Currently in the early stages of product development, the device appears to have a positive effect on improving debilitating Parkinson’s symptoms.

Tests are also ongoing into the positive effect it seems to have on other conditions such as fibromyalgia, migraines and depression.

“I’ve always been a bit of an inventor and I’ve played around with stuff from a fairly early age,” said Sandra who was diagnosed with the condition just before her 40th birthday.

“With my Parkinson’s getting worse I’ve been trying to find ways to make life better, not just for me, but also for my husband Chris who has just had to stay home and be my carer. It’s hard going for him.

“I’d worked on a walking stick that lights up in the dark and already created a device from items around the house to put weights on my arm which stopped my trembling, but it was impractical.

“The Parkinson’s just got worse. In about 2014 I had a very dark period and it really began to affect my mental health.

“My walking started to veer to the right and then to make matters worse it became even more advanced and I was walking in circles.

“I thought I’d be left in a wheelchair.

“At that point I was told I would have to wear an eye-patch for the rest of my life to help with my balance.

“I wasn’t having that.

“I started to play with my eyes and spent two years seeing what they did and how seeing certain things could affected me.

“The idea came to me like a lightning bolt,” Sandra continued. “It was beautifully simple and mind-blowingly clear.

“If I could alter messages to my brain by simply placing something in my peripheral vision, I could make a device that could help to control Parkinson’s symptoms.

“At the time a niece had given me a knitting marker intending it for me to use to knit,” she told The Voice.

“I decided to tie it on to glasses so just the tip was in the peripheral vision.

“When I put them on, all of a sudden I felt a total warmth in my body for the first time in a long time.

“After more playing around with it I started to be able to control my walking, my speech became clearer and the tremors went. I didn’t even need the weights I was still wearing on my arms.

“It took two years to develop but it’s incredible how much it’s changed my life and that of my husband.”

Parkinson’s nurse Ann Saunders, who Sandra credits as having ‘turned her life around’, got involved and the pair worked with the Spalding and District Branch of Parkinson’s UK on the prototype.

In May the company Eye Guide MC Ltd launched its clinic in the Fenland House building where Sandra used to go for sessions to manage her Parkinson’s.

As well as Ann, Sandra’s husband Chris is also on the board of directors.

Sandra also can’t praise the University of Lincoln enough for the continued support with the business.

Both they and Parkinson’s UK provided grants towards the fledgling company.

Sandra says since the soft launch around 60 people have had them created to fit, of which over 80 per cent have reported a marked improvement in their condition.

“It’s not for everyone, and we’re quite clear on that, as everyone’s brain is different,” Sandra said. “But the feedback we’ve had so far is that it has been life-changing for so many.

“Depression is a really big thing for people with Parkinson’s and we’re hearing how it’s improving moods in an instant.

“I had an email the other day from someone who said they were overwhelmed that for the first time in years they’d been able to pick up a cup.

“We are chuffed to bits with how it’s going.

“I’m very lucky to be surrounded by great people in the business such as Ann and Chris while James Pinchbeck from the University of Lincoln has just been incredible.”

There’s also big plans ahead for Eye Guide MC Ltd as part of a five-year plan.

To go alongside the clinic, the company is also looking to open a neurological and respite centre in the area.

“We’re hoping to get a building in Long Sutton to dedicate future research on Parkinson’s but also the other conditions that tests have so far showed the Eye Guide also has an affect on,” Sandra continued. “The idea behind the respite centre for Parkinson’s is that it could be a place where the person with the disease can go for some rest and relaxation, but also their carer can go there too.”

So 22 years after she retired her and husband of 37 years Chris are entering possibly the most exciting part of their lives.

As well as the business venture the pair are back doing more of the things they love including returning to their passion of motorbiking and heading out to meets again.

Sandra, who has eight brothers and sisters, said: “Oh good God they really are proud and they’re not shy to say it as well which can get a bit embarrassing sometimes. It’s lovely.

“It’s really nice and exciting as we are looking to the future, which, when you have Parkinson’s, you don’t tend to do as much.

“The most important thing is I wanted to change my husband’s life. He must have been close to the end of his tether constantly worried and looking after me.

“I have still got Parkinson’s. The Eye Guide is just an aid in the end it’s not a cure.

“Every night I take it off and the shakes come back, but that’s ok.

“I’m definitely not afraid of Parkinson’s any more.”

For more on the Eye Guide MC (the initials are the first letters of Sandra’s surname and included to differentiate it from a completely separate product) contact 01406 362028 or email info@eyeguidemc.co.uk or visit the company’s website www.eyeguidemc.co.uk/

* The Spalding and District branch of Parkinson’s UK meet at Pinchbeck Village Hall on the third Thursday of every month.
Their next meeting is Thursday, October 21. Sessions run from 10.30am to 12pm.