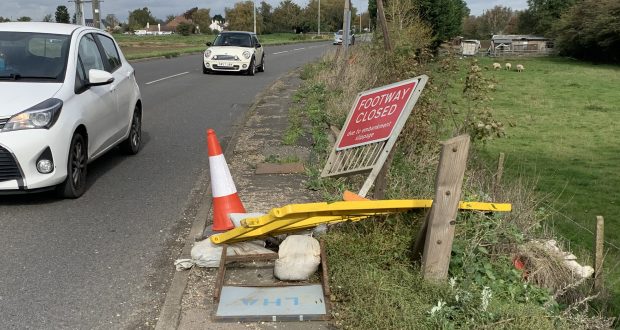 The footpath in Cowbit Road.

The fixing of a footpath will cost nearly three quarters of a million pounds, it’s been claimed amid calls for better safety measures along the length of Cowbit Road in Spalding.

The bank on part of the road between Little London and Fen End Lane partially collapsed years ago.

It means pedestrians have to step in the road to navigate a bend on a part of the road where it’s the national speed limit.

But Coun Harry Dury told the Spalding Town Forum last week its unlikely to be fixed due to the £700,000 price tag.

“I’ve said this for seven years and it has deteriorated even more,” he said.

“The county council say they don’t have a budget to work it.

“They say it would cost £700k to fix that bank and pavement.

“It is dangerous. People walk from Burr Lane and Fen End Lane down there into town and even up to the BP Garage and Little London shops.

“I’ve witnessed people with prams and small children having to walk on to the road in a national speed limit area and, let’s face it, the people who use that stretch of road don’t always keep to the limit.

“It’s an accident waiting to happen. I have continued for the last seven years to lobby and email the county councillor and ward member but I haven’t had anything other than there not being a budget.”

“You take your life in your hands there. It’s not likely to get repaired any time soon.

“Maybe the tactic is to seek a reduction in the speed limit and potentially saving many accidents. With that might come some degree of traffic calming. A build out would give the opportunity to allow people to step into the road safely. It’s amazing there hasn’t been a loss of life in that section.”

Discussion also mentioned other areas of Cowbit Road and it was mentioned that a Community Speed Watch group could be set up for the area.

Roger Perkins said: “Every bit of Cowbit Road from Love Lane to the Tulip Queen is a danger.

“There are cars on the side of the road near Coronation Channel, Little London Bridge is a danger, at the zebra crossing the lighting is very poor and trees obscure what light is there.

“We’ve been speaking to Jan Whitbourn about a speed group that covers Little London and Cowbit Road as they’re dangerous areas.”