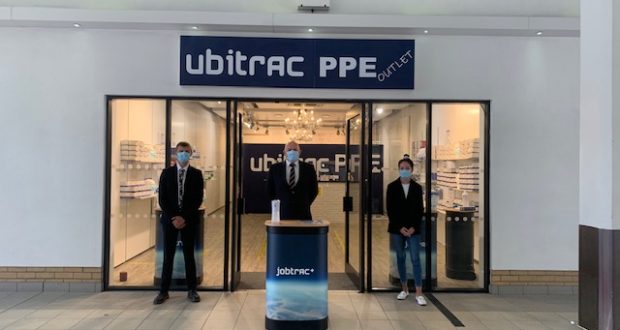 What its owner believes is the first Personal Protection Equipment (PPE) public shop in the country has popped up at Springfields.

Tony Foote, of Ubitrac PPE Outlet, has set up the shop selling items such as facemasks and gowns.

Ubitrac itself is usually a Boston-based tech company with a special emergency app for NHS staff among its regular projects.

But their biggest income involved school transport, which is largely not currently operating so the company needed a new money maker.

One of those it approached was Springfields who asked if Ubitrac would like a shop at the Spalding outlet centre.

Tony said: “As far as we know, it’s the first of its kind in the country.

“There’s a huge market for businesses and shops re-opening.

“Temperature gauges are also proving popular, particularly with parents so that they can check the temperature of their children.

“It’s not been super busy just yet on foot but we are seeing people from businesses noticing us, coming in, taking a card and then contacting us later to buy items.”

Currently ten of the firm’s 14 staff members are working at the shop.

One thing that the shop won’t be selling at the moment is reusable masks.

Tony said: “We made a decision not to sell those as to get rid of COVID-19 they would have to be washed after every use at 60 degree heat and that would shrink them.

“It can stay on the surface and so they wouldn’t be as effective.”