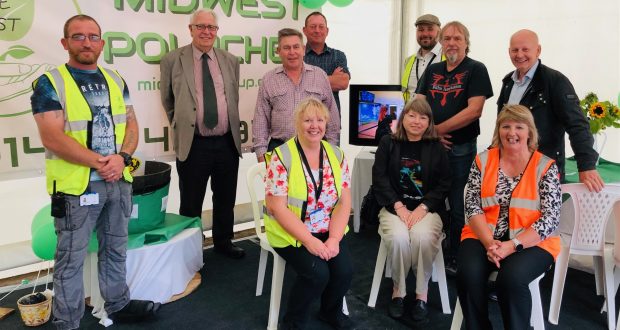 Images from the recent open day at Midwest Polychem's Holbeach Hurn site for which a change of use planning application has been submitted.

A company that opened a multi-million pound waste facility in Holbeach Hurn recently has had to apply for planning permission to continue operating.

Midwest Polychem Ltd staged an official opening in June for its Laurel Lodge Farm processing plant where it’s looking to turn waste plastic waste into pellets for repurposing.
But a change of use application to turn it from a facility for washing and storage vegetables to waste disposal only went live on Lincolnshire County Council’s website last week.
Midwest Polychem Ltd hopes to create 60 jobs at the site which would be open from 6am to 6pm and it says would see five lorries bringing in waste a day and five leaving the site to take the end product elsewhere.
Documents submitted with the planning application say work began on site in May.
The documents state: “It is accepted that this site is located in the open countryside, outside of any defined settlement boundaries but this site is well located and is a significant job creator.
“Although Holbeach is not identified as a main urban area, the site the council is asked to consider is directly adjacent to the A17.”
It continues: “The applicant held an official opening and welcomed investors, local members, MPs, council officers and dignitaries to the site to explain the innovations in plastic processing and the ethos behind the company.
“This was met with great enthusiasm and high expectations for the future in plastic waste management.”
Speaking at a recent ‘open day’ the company also says it’s bought £3.2m worth of land for a similar site in Sutton Bridge which it claims will create up to 600 jobs.
Resources manager Abber Nayaz said the company had spent £13m on the plant at Holbeach.
“We are not a waste opperator, we are a processor.
“It’s a new form of recycling.
“It’s an exciting project that will hopefully be a huge boost for the local area.”
Coun Jack Tyrrell has been involved with the company.
“It’s really innovative what they’re doing and they seem to genuinely want to make a difference.
“They’ve put £3.2m into a piece of land and it’s something that Sutton Bridge and the wider area could benefit from.
“The Holbeach Hurn site is ready to go. They’ve had a licence passed by South Holland District Council and they’re now just waiting to get proper planning approval from Lincolnshire County Council.”