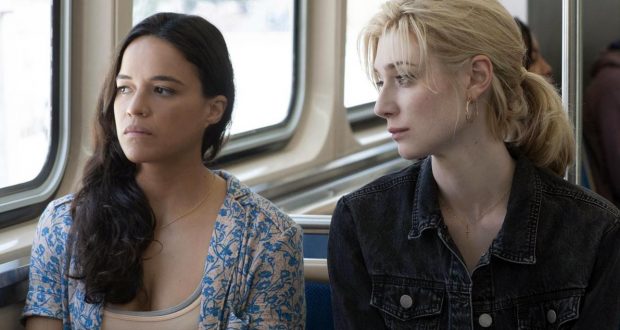 LADIES' NIGHT: Michelle Rodriguez and Elizabeth Debicki as Linda and Alice in the excellent Widows.

Every now and then a film sneaks up and you.

But the heist thriller arrived in cinemas with very little fanfare, nicely highlighted by the fact it was the first film I’ve seen in Boston Savoy’s smaller fifth screen for quite some time.

Don’t let that fool you. Widows – which is an adapted version of the 1980s television show – is gritty, unforgiving and tough to watch (all in good ways), while also being gripping at the same time.

The basic premise of the film, as the title would suggest, focuses on four women who have lost their husbands in a heist gone wrong.

However, instead of wallowing in grief, circumstance dictates that they take on the mantle of their fallen men in a bid to pull off the heist of the century.

It’s her who puts the team together, convincing the pampered (but ill-treated) Alice (Elizabeth Debicki) and steely retail store owner Linda (Michelle Rodriguez) to join her in what appears to be something of a suicide mission.

Carrie Coon’s Amanda isn’t so keen but still has a major role to play, as does street-wise hairdresser Belle (Cynthia Erivo).

With Veronica in possession of Harry’s notebook, which goes through the job in great detail, the amateur thieves must find a way to pull the heist off – or risk a lengthy spell in the slammer.

The pair are running for office in a 2008 Chicago setting, with their respective fetes very much intertwined with the team of widows.

Jamal’s brother Jatemme (the excellent Daniel Kaluuya) has his roots very much on the street, however, delivering a menacing performance throughout.

Throw in cameos from Jon Bernthal, Manuel Garcia-Rulfo, Molly Kunz and Robert Duvall and the amount of acting talent really is off the stage here.

If you’re expecting a fun heist offering in the mould of Ocean’s 11, you’d be very much mistaken. I mean that in a good way, as Widows is a genuinely gripping film that really has no room for humour.

Davis and Debicki, in particular, deliver incredible performances as women who put their fear aside to become empowered by the daunting job in hand.

It was also great to see Farrell at his best, with his interaction with father Duvall a real highlight. Kaluuya threatens to steal the show too, as he serves as the most obvious villain of the piece.

With a great twist and some truly memorable moments, there’s nothing not to like about Widows, which is easily one of the films of the year so far.