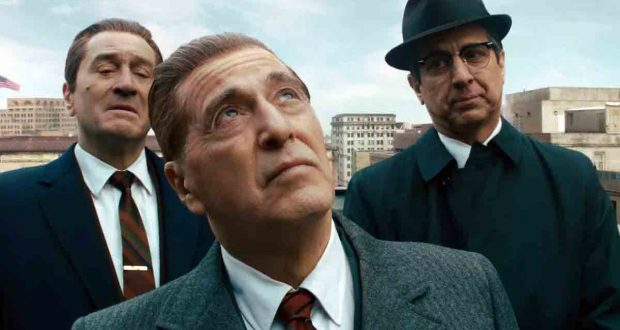 Scorsese. De Niro. Pesci. Pacino. With the iconic and legendary names surrounding The Irishman, Martin Scorsese’s latest masterpiece more than lives up to its promise.

Backed by Netflix, The Irishman is Scorsese’s first film to have a limited cinema release, but rather a more prominent appearance on the small screen.

Twenty five years after Scorsese’s last collaboration with Joe Pesci and Robert De Niro, thanks to the power of CGI, the three genre icons reconvene in this epic crime drama.

Based on Charles Brandt’s 2004 book I Heard You Paint Houses, the film follows ‘The Irishman’ Frank Sheeran (De Niro), a truck driver who becomes a hitman with mobster Russell Bufalino (Pesci) and his family of criminals, whilst also drawing on his time working for the influential Teamster Jimmy Hoffa (Al Pacino).

With the opening shot setting the scene in a retirement home, we are initially introduced to a wheelchair-ridden Frank in his 80s.

His confessional inner monologue switches to the film’s narration as he reminisces over his both prideful and regretful life.

Through the use of de-aging technology, the narrative spans six decades where we delve into the rise and fall of Frank’s involvement with the Mafia, and his politically-fuelled friendship with Hoffa.

Supporting roles played by Harvey Keitel, Ray Romano, Bobby Cannavale, Anna Paquin and Stephen Graham all stand out and have an immensely important impact on the narrative.

Although some of their performances brief, there is no one that stands out more than the other – they all manage to successfully submerge themselves into the world of Scorsese with no issue whatsoever.

In some ways, you need to have multiple viewings in order to really appreciate and take in every little detail of what you are actually witnessing on the screen – nothing shy of a masterpiece.

During its three-and-a-half-hour runtime, each scene is as important as the last and I certainly didn’t feel that I had been watching it for that long.

De Niro’s performance was the absolute stand out for me.

His subtle nods to the character he’s playing are, in some way, a blink-and-you’ll miss it kind of acting style.

Although some have said De Niro hasn’t been on the top of his game since the mid-90s, his performance here easily proves that he is one of the greatest of all time.

One of Scorsese’s darkest films to date, The Irishman has already earned itself Oscar buzz, whilst also being rightfully recognised as one of the most significant films of the year, nay, the decade.