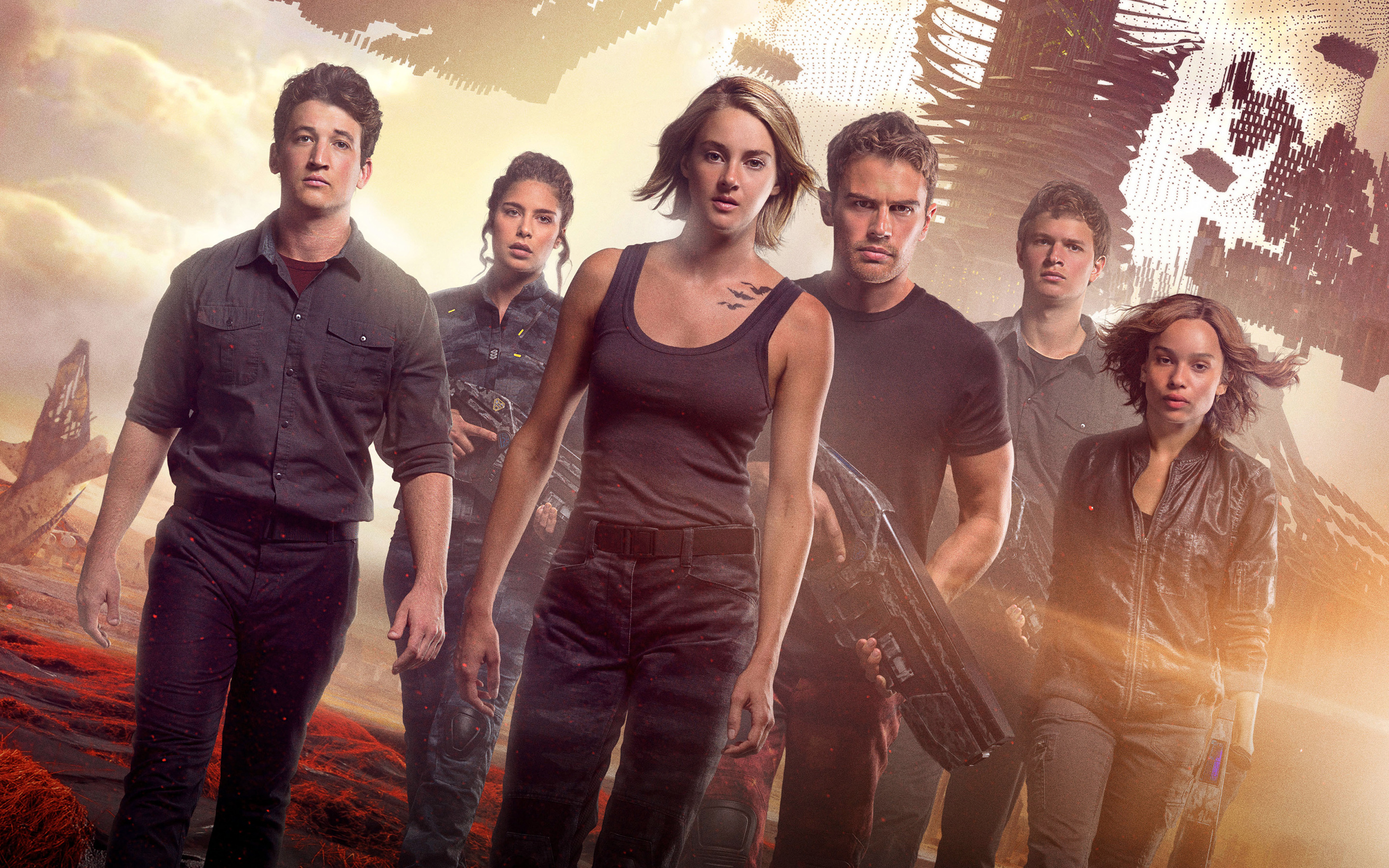 SAVING THE DAY: Shailene Woodley (centre), Theo James (right of centre) and Miles Teller (left) are back in Allegiant.

Against all of the odds, I’ve actually quite enjoyed the Divergent films so far.

Sure, the series doesn’t really bring anything all that new to the table with its post-apocalyptic setting and young adult (YA) cast, but it has at least been watchable so far.

I’m invested in the main characters and am interested to see how the story ends, but it does feel like the series is on something of a downward spiral ahead of next year’s finale (Ascendant is due out in June 2017).

For those of you that have missed the big screen adaptations of the Veronica Roth books, here’s a brief rundown of what has happened so far.

Divergent (2014) depicted a futuristic (and, of course, post-apocalyptic) world in which society is divided into five factions depending on personality and virtues.

Tris Prior (Shailene Woodley – The Fault in Our Stars) discovered that she didn’t fit into any one faction, making her “Divergent” – a group of people feared by society (for some reason I still can’t understand).

Then came last year’s Insurgent, which essentially saw Tris and her group of friends – including boyfriend Four (Theo James – The Inbetweeners Movie) battling back against the system.

The end result was that the group discovered that their city (a dystopian Chicago) wasn’t actually the last city on the planet (go figure).

What they find is a scorched wasteland akin to the Fallout video game series – and the Bureau Of Genetic Welfare, an organisation run by Jeff Daniels’ David.

After that, things get a little fuzzy, with Tris and their crew forced to put their trust in the shady organisation in a bid to prevent all-out war breaking out back in Chicago.

Tris is told that David can help bring peace to the city, but her friends – especially Four – don’t share her trust in him and the Bureau.

If that sounds a little convoluted, you’d be right.

Allegiant is clearly serving as a bridge to next year’s finale (yep, the last book has been split in half again) – and it’s incredibly long-winded as a result.

Thankfully, the cast remains strong. Without the groundwork done in the previous two movies, this Robert Schwentke-directed offering would be a real stinker.

One of the biggest problems with Allegiant is that it essentially benches Tris for large parts. Woodley has dragged this series through the mud since its inception, but is sadly under-used here.

James’ Four is left to do the heavy lifting – and once again I thought he did a solid enough job.

The talented Teller feels a little bit relegated to the comic relief side of things, but does at least have a better arc later in the film.

Daniels, as the big newcomer, typically steals most scenes that he’s in.

He does, however, look to be on autopilot in a role that he’s a little over-qualified for.

Looks-wise, Allegiant is as beautiful as ever. But some of the CGI is way off point. The worst moment is when Tris and co become engulfed in bizarre plasma bubbles, which look horribly amateur.

If you liked the first two films, Allegiant is worth a watch – even if it is the weakest of the series so far.

For any newcomers, give this a pretty wide berth.