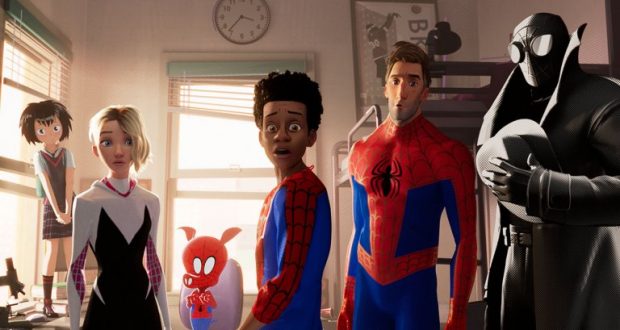 The many faces of Spider-Man converge in Spider-Man: Enter the Spider-Verse.

Visually stunning, hilarious, heart-warming and end-to-end thrilling, Spider-Man: Into the Spider-Verse is the radioactive shot in the arm our formulaic superhero movies have needed.

An incarnation of Spider-Man is currently hanging around in the sprawling Marvel Cinematic Universe (MCU) series, which continues to trundle on like a superhero-packed soap opera that long left behind the casual viewer who might not seen its 20 films (and counting…).

In stark contrast, Spider-Man: Into the Spider-Verse is a standalone marvel that is crammed with ideas, invention, fun and wit.

It’s also crammed full of Spider-men (and spider-women, and a spider-pig…).

See, when the hulking villain Kingpin smashes open a rift in time and space, multiple versions of New York start to converge and various incarnations of Spider-Man from the character’s near-60-year history of comics, TV and film are brought together to try to close it.

Teenager Miles Morales takes the lead, with his cop father and graffiti-teaching uncle showing him two paths he can take in life. Morales is voiced with vim by Shameik Moore (Dope), who gets across all the worry and fun of teen life.

The first Spider-Man that crashes into Miles’ world is Jack Johnson’s (The New Girl) Peter B. Parker, who has piled on some pounds after losing his mojo and the love of his life, Mary-Jane Watson.

Johnson’s hilarious as a slobby superhero, managing to perfectly swing between pathos and apathy.

Miles and Johnson’s Spider-Man’s relationship is funny and moving, with lessons learned naturally as they grow together.

In their attempt to fix the rift, the encounter the black-and-white Spider-Man Noir, voiced by Nicolas Cage revelling in the 40s-inflected dialogue.

Finally (surprises aside), there’s Peter Porker / Spider-Ham, who first appeared in 1983 and is here voiced to hammy perfection by John Mulaney.

Together their story thwips along like a Spider-Man speed-swing through Manhattan, thanks to the stellar script from Jump Street series writers Phil Lord and Rodney Rothman.

Multiple Spider-folk and familiar villains aside, the true star of the film is the film itself: It’s rare to go to the cinema and feel like you’re seeing something truly new, but the visual style of this film is breathtaking.

The digital animation is relentlessly beautiful and inventive, with each style tailored to suit each character’s universe and backgrounds rendered in traditional Ben-Day printing style, while modern graphics contrast in high definition in the foreground.

Some sequences here will make your eyes as wide as the last 15 minutes of Kubrick’s 2001: A Space Odyssey. It’s honestly that good.

It’s also wholly free of cynicism and entirely heartfelt in its morals, message and delivery. The film starts with a stamp that proudly declares it’s approved by the Comics Code Authority, so it’s true fun for all the family and the most spectacular surprise of the season.