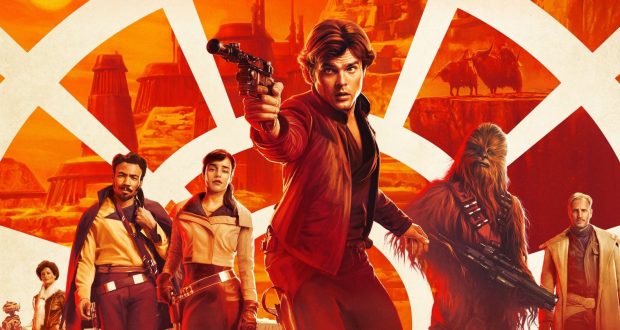 Has there ever been a more daunting task in modern cinema than taking on the mantle of Han Solo?

Harrison Ford’s iconic Star Wars character is perhaps the most popular in the entire sci-fi genre, so there was naturally a lot of trepidation when Solo: A Star Wars story was announced.

Since Star Wars returned to the big screen back in 2015, it’s fair to say that each film – Force Awakens, Rogue One and The Last Jedi – has been well received.

Does Solo live up to those lofty standards? Well, not quite. But it’s still great fun to see at the cinema with a strong set of characters, led impressively by Alden Ehrenreich as Han.

Billed as an origin story, the Ron Howard-directed offering is a bit of a join-the-dots story as to how the loveable rogue gets hold of his trademark gear and makes his well-known friends.

Full of charm and textbook Star Wars nostalgia, there’s just enough here to satisfy fans of the biggest of all franchises, while also being accessible to newbies.

We meet Han on his homeworld Corellia, where he and his love interest Qi’ra (Game of Thrones star Emilia Clarke) yearn to escape and see the galaxy.

Things don’t quite go as they plan, but that does at least set Han on a course that will eventually lead to him being the fast-talking, fast-flying smuggler we met in Episode IV: A New Hope.

I’ll not go into the story too much to avoid spoiling, but it’s fair to say that we discover how he gets his hands on the Millennium Falcon, as well as the moments he meets legendary allies Chewbacca (Joonas Suotamo) and Lando Calrissian (Donald Glover).

And, of course, we also find out what that Kessel Run story is all about.

Ehrenreich is brilliant as Han, capturing enough of Ford’s version while also putting his own spin on everbody’s favourite scoundrel. I’d certainly like to see him in the role again.

Han’s relationship with Qi’ra is central to the story, with Clarke portraying another strong female character pretty well.

She’s quite a mysterious figure throughout, but her arc did feel somewhat unfinished.

However, it’s perhaps Han’s relationship with mercenary Tobias Beckett (Woody Harrelson) that shapes him the most.

Harrelson plays the role of grizzled mentor as well as anybody these days, and he’s on good form here.

Beckett’s crew also includes Thandie Newton’s Val and the Jon Favreau-voiced Rio, but they’re not as well fleshed out.

They report to Dryden Vos (Paul Bettany), who is the somewhat underwhelming overarching villain here.

But come on, you want to know about Lando and Chewbacca, right?

You’ll be pleased to know that both shine here, with Chewy getting his most central role in any Star Wars film to date.

Glover, meanwhile, is superbly cast. He has plenty of swagger and displays all of the traits you’d expect, while also playing out some of the scenes the two mention in the original trilogy.

I’d like to have seen more Lando, truth be told, but his relationship with droid L3-37 (Phoebe Waller-Bridge) is one of Solo’s highlights.

The fast-talking mech carries on the trend of show-stealing Star Wars droids with a funny turn that is also sure to trigger much discussion.

Overall, I was left wanting a bit more from Solo. It does a great job with its casting, but the story felt a little tame.

Don’t get me wrong, it is still great fun and is sprinkled with Star Wars magic, but – by the very high standards of what came before it – this is the weakest of the new offerings to date.