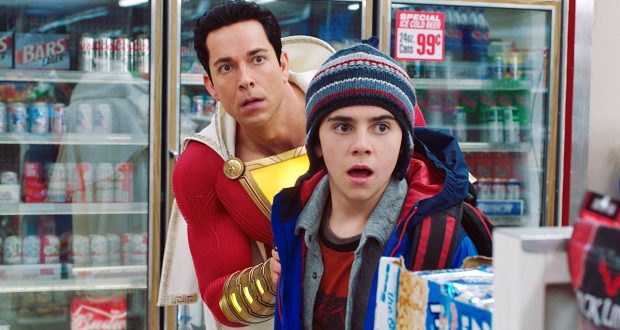 ALL GROWN UP: Zachary Levi (left) and Jack Dylan Grazer as Billy Batson and Freddy Freeman in Shazam!

In the very crowded super-hero genre, it’s difficult to stand out from the rest.

As somebody that enjoys all things Marvel and DC, Shazam! always looked like taking a different route to the many that came beforehand.

With a youthful cast and a hero who isn’t quite as mainstream (or serious) as the likes of DC stalwarts Batman, Superman, Wonder Woman and Aqua Man, it’s fair to say that this ‘coming of age’ offering feels like the ‘risk’ Marvel took when turning to The Guardians Of The Galaxy.

I’m pleased to say that the risk pays off, as Shazam! is packed full of humour and charming characters.

However, it does fall foul of one of the usual super-hero bugbears – a villain that ultimately underwhelms.

Shazam! is the story of Billy Batson, a teenage streetwise orphan who has passed through numerous foster homes due to his urge to track down his absent mother.

However, he soon has magical gifts bestowed upon him (I’ll not spoil how) and essentially becomes a little like Superman (he can fly, has super speed, is bulletproof, etc).

The catch is that he turns into the optimum version of himself – meaning he grows up in an instant.

Played by both youngster Asher Angel and Zachary Levi throughout the film, Billy’s story is a heartfelt one as he bids to prove that he’s truly worthy of his powers.

As you can imagine, any story about a teenager being handed superpowers is going to play out much differently to the usual ‘origin story’ we’re often served up.

Billy has serious issues caused by the way his parents have treated him, but the film is careful to treat them respectfully.

There are also strong turns from The Walking Dead’s Cooper Andrews and Marta Milans as Victor and Rosa Vasquez, who act as endearing foster parents to them all.

Meanwhile, Mark Strong is very solid as the villainous Dr Sivana, who has a decent back story. His clashes with Shazam! are largely enjoyable, but things fall flat when he unleashes his ‘deadly sins’ themed CGI minions.

It’s appreciated that Sivana isn’t on a quest to end the world, though, with his quest for power feeling like a much more organic plot.

I can’t say that Shazam! is up there with my favourite super-hero films of the past decade and it lacks the kind of gravitas you associate with this kind of film.

With Levi and Grazer particularly impressing, I do think there’s mileage in a sequel, though.

Boasting plenty of teen humour, gags galore and solid action, Shazam! might not be the strongest super-hero offering of the year, but it’s plenty of fun.