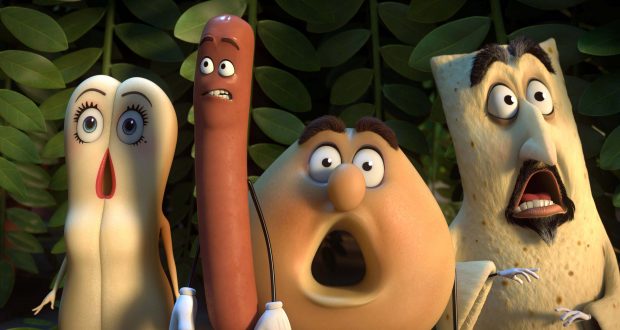 It’s hard to know where to begin when it comes to reviewing Sausage Party, which is perhaps the most bizarre film I’ve seen this (or any) year.

Written and produced by Seth Rogen and Evan Goldberg, Sausage Party is a raunchy animated comedy set largely in a supermarket – with the various items inside starring as the main characters.

Set on the eve of America’s July 4 holiday, we discover that the products inside grocery store Shopwell’s are all dreaming of being picked up by their gods (the human customers) and taken to what they call the Great Beyond (outside of the shop).

They believe that they are going to a heavenly place where they’ll see out their lives in idyllic circumstances.

For example, hot dog Frank (voiced by Rogen) and bun Brenda (voiced by Kristen Wiig) dream of finally leaving their packaging and consummating their romance.

However, that dream soon becomes something of a nightmare when a traumatised Honey Mustard (picked up by mistake) is returned to the store. He tells his fellow items of the false dream – and that certain death by human consumption awaits them.

Naturally, nobody believes him – it’s the ridiculous equivalent to a person of faith being told their chosen religion is folly, after all.

Rather than choosing to venture back to the Great Beyond, Honey Mustard makes a choice that changes the world of the items forever and the landscape of Shopwell’s shifts to largely humorous effect.

I say largely, as it’s likely that many of you reading will be massively offended by Sausage Party.

If you can handle the constant X-rated jokes, then there’s plenty of ethnic and racial stereotyping that may push you over the edge.

There’s even a conflict between Arab and Israeli produce in the form of an argument about supermarket shelf territory and a bad guy that takes the form of an actual douche (voiced by Nick Kroll).

As somebody that doesn’t offend easily, I found some of those threads pretty funny, but never to the point of genuine belly-laughing.

The story, which is essentially a sausage, bun and friends traversing the supermarket in a bid to uncover the truth and find a way to survive, is ridiculous.

But what else should you expect from a film called Sausage Party?

Animated movies have never really been my thing – and Sausage Party doesn’t really do enough to change my mind overall.

It’s very much the anti-Disney animated offering, with strong language and themes running throughout (the final scene dials up the crazy to the highest possible level).

I did appreciate just how far out there Rogen and Goldberg were prepared to go with their crazy idea and the fact that they fully commit did win me over a little by the end.

But it’d be hard for me to give this a seal of approval. If you offend easily, steer clear.

If not, prepare for the weirdest animated film ever.

Voice Verdict: 6.5/10 (reviewed at Boston’s West End Cinema)
+ Fully commits to bizarre story
+ Top voice talent
+ Can be funny…
– …but those easily offended should give it a miss

KIDS’ CLUB
Sat/Sun 10.15am – Alice Through The Looking Glass