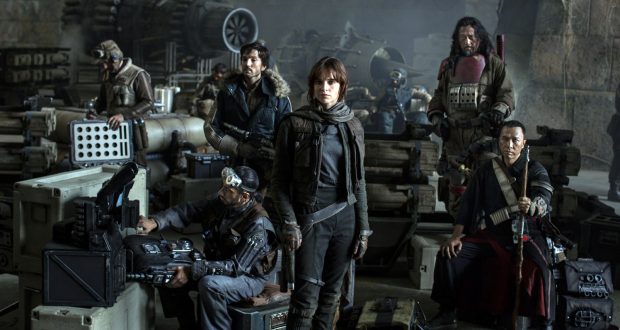 GOING ROGUE! From left – Riz Ahmed, Diego Luna, Felicity Jones, Wen Jiang and Donnie Yen are just a few of the great characters in Rogue One: A Star Wars Story.

Being the first of the all-new Star Wars spinoff films always felt like being quite a big burden for Rogue One to carry from the moment it was announced.

It’s the first film in the series not to carry a traditional episode number – and it doesn’t even have the trademark scrolling story at the start (or any Jedi).

But don’t be fooled or worried, as Rogue One – which could easily have been numbered Episode 3.5 – is certainly one of the top movies in the series’ glittering stable to date.

It focuses on the Rebel Alliance discovering the existence of the dreaded Death Star and their hunt to discover the plans that they believe will be key to destroying it.

Taking centre stage this time is Jyn Erso (Felicity Jones). Although not a member of the Alliance when we meet her, she’s aggressively recruited by the Rebel leader Mon Mothma (Genevieve O’Reilly).

Jyn is seen as a vital part of their bid to find her father Galen Erso (Mads Mikkelsen) – who is the mastermind scientist behind the creation of the Death Star.

That sees her paired with operative Cassian Andor (Diego Luna) and his droid, K-2SO (Alan Tudyk), with the trio seeking key players in the hunt for Galen.

Their journey begins on Jedha – a planet that is linked strongly to The Force – and sees the team chasing pilot Bodhi Rook (Riz Ahmed).

He’s defected from the Empire and has vital information, but is also on the radar of Saw Gerrara (Forest Whitaker) – an anti-Empire warrior who isn’t a part of the Alliance either.

Here they also meet Chirrut Îmwe (Donnie Yen) and Baze Malbus (Wen Jiang), two impressive fighters with differing views on The Force but no love for the Empire.

The team must find Galen and gather the all-important information about the Death Star – but their movements don’t go unnoticed.

Indeed, Ben Mendelsohn’s Director Krennic serves as a villain right out of the original trilogy and has links to both Jyn and Galen.

However, the brief appearances made by Darth Vader (voiced by James Earl Jones again) do blow the rest of the Empire bad guys out of the water.

It’s chilling to see Vader at perhaps his most evil – and the cameos he makes really do add to his legend.

While Rogue One doesn’t have the nostalgia of last year’s Force Awakens, it certainly deserves to be mentioned in the same breath as the brilliant Episode VII.

There are Easter Eggs galore for fans and it really adds to the Star Wars universe in so many ways.

There are some great new locations (the tropical Scarif a notable standout) and another memorable Alliance versus Empire space battle.

Jones is a superb lead as Jyn, while Luna brings great charisma and K-2SO the (very dry) comic relief.

You’ll also find it easy to get behind Chirrut and Baze, while the star power of Mikkelsen and Whittaker is very welcome.

It’s also one of the best looking films of the year, but you come to expect that from Star Wars these days.

In short, Rogue One is another stellar Star Wars film that is not only a great prequel to the original trilogy but also very accessible to people that are first-time viewers.

It’s a must-see over the holidays.