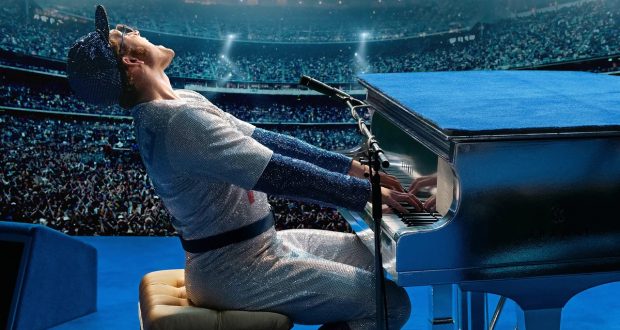 CAN YOU FEEL THE LOVE? Taron Egerton is on electric form as Elton John in Rocketman, leading a very strong cast.

After the remarkable success of last year’s Bohemian Rhapsody, it was inevitable that plenty more films focusing on the lives of much-loved musicians would follow.

Step forward Rocketman, another biopic about a British rock legend from director Dexter Fletcher – only this time following the trials and tribulations of Elton John.

It’s fair to say that Bohemian Rhapsody played it safe when it came to Freddie Mercury’s ‘extracurricular’ activities, but that’s not a trend repeated here.

Sure, Rocketman is full of fantasy and even borrows a few scenes from the musical genre, but it refuses to hide away from the drugs, booze and sex that John was almost synonymous with at one stage of his life.

Taron Egerton pulls off the lead role to spectacular effect, even managing to look like the infamous rocker at certain points – something I didn’t really imagine possible.

Rocketman follows John’s life all the way from his childhood, to his partnership with Bernie Taupin and eventual rise to huge fame, before delving into to his self-destructive ways and all the way to the beginning of his journey to redemption.

It’s impossible to not feel something for the lead character after witnessing the early moments of the film, given how John – real name Reginald Dwight – is treated by his parents. Seemingly a burden for mother Sheila (Bryce Dallas Howard) and barely recognised by callous father Stanley (Steven Mackintosh), he lives a lonely existence.

Things change when his talents on the piano are recognised and an older John, now played by Egerton, is thrown together with Taupin (Jamie Bell).

The pair hit it off, with Taupin providing the words and John nailing the music and performing the songs.

It’s (eventually) a match made in heaven for Stephen Graham’s Dick James, who serves up a record contract and propels John into the public eye.

We all know what happened next in terms on the music and success that followed, but it’s John’s personal life that soon comes to the fore.

Enter Richard Madden’s John Reid, a manager as suave as he is toxic. It’s John relationship with him that begins his spiral – with both actors playing it superbly.

Whether you’re a fan of John or have no interest in his music, the story here is worth your time. It’s packed with fantasy and music, sure, but the heartbeat of the story is certainly not to be missed.

Egerton chose to sing all of the music himself, which felt like an odd decision at the time. There are moments when he’s difficult to hear, but on the whole he nails the role.

Likewise, Bell and Madden are real stand-out performers here, while Dallas-Howard is almost unrecognisable but delivers a great performance.

Personally, I’m not a big fan of musicals and John’s music isn’t really to my taste.

The scenes that were musical-like turned me off a little, but the threads that branch off into fantasy do work very well.

It’s both an uplifting and heart-breaking story that should be accessible to all and is likely to be John’s last big hit.