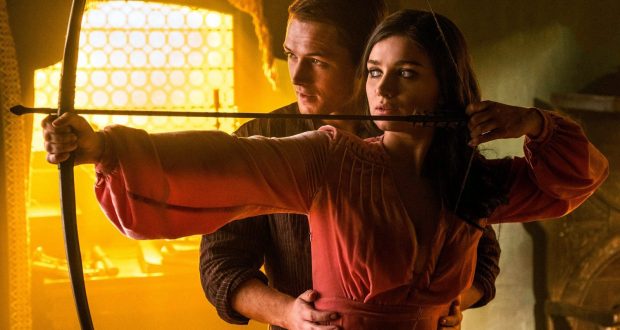 GOOD ARROW: Taron Egerton and Eve Hewson as Robin of Loxley and Marian in the latest Robin Hood offering.

I must admit to being very surprised when I first saw the trailer for the latest Robin Hood film.

Looking more like the Green Arrow than Nottingham’s favourite son, my first impression of Otto Bathurst’s new rendition was more Assassin’s Creed than Prince of Thieves.

That being said, with Taron Egerton, Jamie Foxx, Ben Mendelsohn and Jamie Dornan all attached to the project, it certainly arrived on the big screen with plenty of potential.

However, the obvious problem here is that the story of Robin Hood has been absolutely done to death.

Sadly, the 2018 version doesn’t seem to realise that, spinning a familiar yarn in quite an odd way – even though its stellar cast all deliver in their respective roles.

With that in mind, it’s quite amusing that the film begins with a narrator telling the audience to “forget what they’ve seen before.”

Anyhow, you know the drill. Robin of Loxley, who enjoys a fine life with his love Marian (the impressive Eve Hewson), sees his world turned upside down when he’s conscripted into battle by Ben Mendelsohn’s Sheriff of Nottingham.

Shipped half the way across the world to do battle in Arabia, Robin is among a platoon of longbow-wielding soldiers bidding to take down the natives.

It’s an enjoyable period of the film, with exciting action and some standout moments that are otherwise lacking later on.

It’s here that he meets Foxx’s Yahya (John to his English mates) and the pair bond following one of the story’s more brutal moments.

The duo return to England four years after Robin’s departure to discover that he was legally declared dead two years prior – setting them on a vigilante-style path that they hope will lead to them bringing down the Sheriff.

It’s a familiar theme used in the most recent iterations of the Robin Hood story, albeit with a slightly more personal feel for Loxley himself.

Indeed, much of the plot feels more like Robin’s quest to get his old life back, with the age old ‘robbing from the rich to give to the poor’ more of a consequence of his actions rather than an obvious aim.

For what its worth, Egerton is well cast in the lead role here. His natural charisma and charm shine through and make you wish the story served the character better.

His chemistry with Hewson is obvious from the opening scene and they both deliver pleasing performances.

The same can be said for Foxx, who works well in his role as Robin’s mentor.

The stand-out performance comes from Mendelsohn, however.

He’s fleshed out nicely as a villain who has a nasty mean streak while also offering us an insight into why he is so twisted.

It’s with that in mind that the shallowness of the story is so disappointing.

You could argue that the main roles are all perfectly cast, but they are given a poor script to work with.

A sequel is also teased at the end of the film, which promises to tread even more familiar ground.

And that’s the big problem with the 2018 version of Robin Hood; it offers nothing new to the legend of the character, instead doing a bad job of telling the same story.

There’s great potential with this set of characters, but sadly this is a bog-standard action fare that fails to justify its existence.