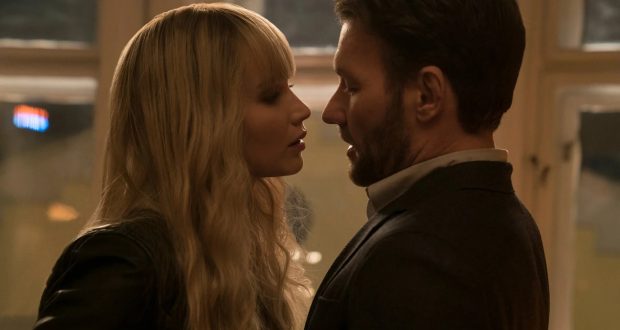 Red Sparrow might just be the most brutal film I’ve seen in some time.

For some of you, watching one of Hollywood’s top female talents – the excellent Jennifer Lawrence – go through a number of dehumanizing ordeals will be enough to turn you off this spy-thriller.

But, if you can see past the extreme violence and abuse that goes on in director Francis Lawrence’s (I Am Legend) latest offering, there is a pretty solid story here.

We meet her as a renowned ballerina, wowing audiences on the big stage in Russia. However, a nasty leg injury stalls her progress and she’s forced to look elsewhere for much-needed income, mostly required to care of her ill mother.

Of course, the amazingly creepy Vanya has a sordid mission for his niece, which involves seducing a high-profile fan of hers.

The mission goes brutally off course and sees Dominika packed off to become an infamous Russian Sparrow (special agent) at a place she describes as “whore school”.

There, she – and a host of other young men and women – are taught how to use their body as a weapon and to let go of their humanity.

Broadchurch’s Charlotte Rampling offers a rather creepy turn here as the Matron of the building – and there are some very shocking scenes.

But Dominika is soon dispatched on a special mission that involves getting close to CIA agent Nate Nash (Joel Edgerton) in Budapest and working him for sensitive data – namely the identity of a high-ranking mole within the Russian government.

It’s all very cloak and dagger stuff, but you can be rest assured that a forced romance follows.

I’ll not delve too deep into the story from then on, but it is a solid spy yarn that did keep me interested throughout the lengthy 2.19hrs running time.

Lawrence, for my money one of the best actors in the business, does a very good job in what is a pretty demanding role here.

The visceral violence her character must endure is a real stand-out element of the film and really pushes the boundaries of a 15 certificate.

I felt it helped build the character, but the severe nature of some of the scenes – which include attempted rape and extended torture – aren’t for the faint hearted and could be a deal breaker for some viewers.

Her Russian accent is a little bit on the nose, but it’s Dominika’s forced relationship with Nate that does grate the most.

The trailers gave that one away before a ball was kicked, but I never really sensed too much chemistry between the pair.

In fairness, Edgerton – himself a fine actor – does do a solid job with his material.

What I will say is that Red Sparrow has a great ending, which had me interested in what may happen next (if anything).

And, while this isn’t the strongest spy film you’ll see, it’s nowhere near as bad as some critics would have you believe.

Voice Verdict: 7/10
+ Solid spy story
+ Great ending
– Strong themes and violence may be too much for some
– Forced romance