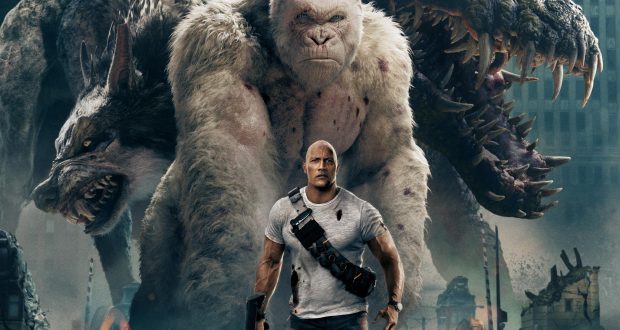 I don’t think I’ve ever seen a more fitting title for a film than Rampage.

It’s exactly the kind of word I think of when you mix Dwayne ‘The Rock’ Johnson with an over-sized gorilla, alligator and wolf and put them in the middle of a city.

Inspired by an arcade game of the same name, Rampage is a largely ridiculous action-fest – but you kind of accept that before you walk into the cinema.

From the get-go we’re introduced to the concept of “genetic editing” and how it was once used for curing diseases before being deemed illegal.

Naturally, there are some people still practicing in the world and, when things go wrong, the formula is accidentally unleashed and three wild animals become monstrous mutants.

One of those three is George, an albino ape that The Rock’s character Davis Okoye has a strong bond with (yep, he’s an ape whisperer of sorts).

So, when George hulks up and essentially suffers from major roid rage after being enhanced by the pathogen, Davis goes on his own kind of rampage in a bid to save him from certain death at the hands of the military.

He’s joined by Oscar-nominated Naomie Harris, who plays scourned scientist Dr Kate Caldwell. She claims to have a way of curing George’s genetic changes, but also has her own beef with the company who created it.

And that brings us to the worst part of Rampage, villainous duo Claire Wyden (Malin Akerman) and her brother Brett (Jake Lacy).

They head up the company responsible for the genetic editing and have a plan that is so bad, it’s funny.

Both chew the scenery and deliver lines that’ll make you (and probably themselves) cringe.

There’s also a very “Negan-esque” turn from The Walking Dead’s Jeffrey Dean Morgan, who plays a government agent in the exact same way as his character on the hit Fox show.

Throw in a cameo from Joe Manganiello, who pops up as a mercenary tasked with hunting the creatures and, all things considered, it’s a pretty strong cast for what is largely a generic action fare.

The plot may be woeful, but the action and carnage that the creatures create does make for decent ‘leave your brain at the door’ viewing.

Naturally, The Rock’s charisma does help anchor proceedings and his relationship with George is at the centre of the main plot.

To be honest, George may even be the best character.

It’s hard to take Rampage too seriously. It’s as cheesy and on-the-nose as you’d expect, but it does have a certain charm.

I enjoyed the chaotic nature of the battle scenes and the banter between The Rock and Morgan was pretty funny, too.

It’s enjoyable on the big screen, but it’s essentially Sharknado on steroids.

That’ll turn some people off, but there’s lots of dumb fun to be had here.