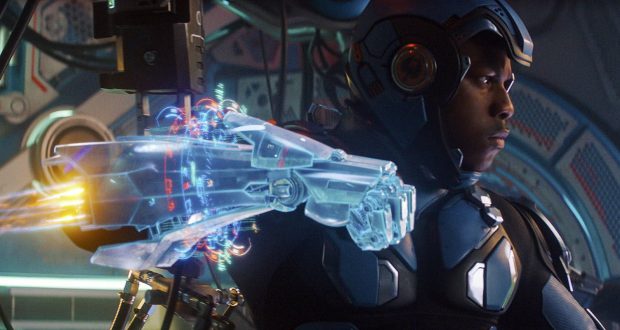 What’s not to like about gigantic robots fighting equally massive monsters on the big screen?

That’s the question the Pacific Rim franchise asks – and, if I’m honest, I’m in complete agreement with them.

The 2013 original may not have boasted an impressive story, but the action served up was breath-taking.

That won Guillermo del Toro’s all-action offering a solid fanbase ahead of Uprising, which serves as a direct sequel.

For any of you not familiar with the plot so far, Idris Elba’s Marshal Stacker Pentecost essentially ended the brutal war between humans and the other-worldly Precursors by destroying the ‘breach’ that allowed them to send gigantic monsters (called Kaiju) into the world.

Their aim was to take control of the earth, but the humans created huge war machines (called Jaegers) to combat the Kaiju threat (if that’s complicated, think of it as Godzilla versus Transformers).

Anyway, the plot picks up ten years later on an earth that has seen no ‘events’ since the closing of the breach. Destroyed cities have been rebuilt, but the Kaiju presence looms large.

Some coastal towns are lined with their remains, while groups of the human race even worship the creatures.

Stacker’s son Jake Pentecost (John Boyega), who washed out of Jaeger-pilot school, is our window into this new world.

He drifts around the areas that haven’t been rebuilt, looting fallen Jaegers and selling the parts on to shady characters.

However, after an exciting opening sequence, he and the Jaeger-building youngster Amara (Cailee Spaeny) soon find themselves part of Pan-Pacific Defence Corps.

With the threat of the hellmouth-born aliens Kaiju not fully extinguished, they’re tasked with helping aid the defensive efforts of the world.

We’re also introduced to Liwen Shao (Tian Jing), who has a seemingly sinister plan to replace Jaeger pilots with remotely-manned drones. The main story branches out from there, taking some surprising twists and turns.

But who am I kidding? Pacific Rim is all about the action – and everything is bigger this time around. The fights are faster, slicker and pack more punch – and I was totally immersed watching the action unfold in impressive 3D. Some of the visuals are as good as you’ll see at the cinema, which more than make up for the obvious plot holes that you’ll come across in the story.

Boyega impresses as the lead here and is afforded a huge amount of screen time – which works pretty well.

Fans of the original will also enjoy the respective arcs of the returning characters, but those absent (and not listed as dead) are conspicuous by their absence (we’re looking at you, Raleigh Becket).

Yes, the story is ridiculous and far-fetched again. But, for the amazing visuals and brilliant battles, Pacific Rim Uprising is a great watch on the big screen.

And, without giving too much away, it seems an exciting new direction is on the cards for the next film…

Voice Verdict: 8/10
+ Awesome visuals
+ Battle scenes are amazing
+ Boyega shines
– Far-fetched story and focus on action may put some off