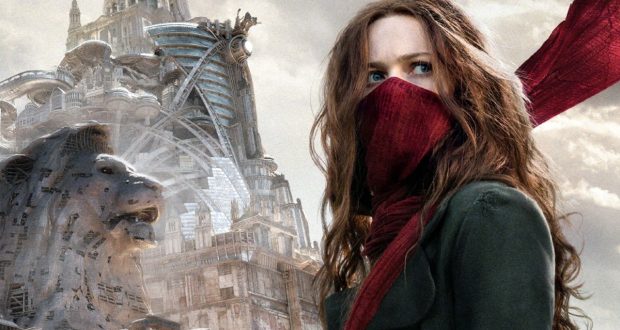 HIGH ROLLING: The talented Hera Hilmar as Hester Shaw in Mortal Engines, with a glimpse of the impressive London setting.

If you’ve ever wondered what the child would look like if Star Wars and Mad Max got together and had a baby, the answer is probably Mortal Engines.

That’s quite a big statement to make straight out of the gate – maybe because it never reaches the uber high standards of either series – but bear with me.

Mortal Engines, this year’s most innovative and ambitious blockbuster for my money, is perhaps the most visually impressive film I’ve seen at Boston Savoy since Bladerunner 2049.

It’s another film to focus on a post-apocalyptic world, set hundreds of years after civilization was destroyed (inside just an hour by a cataclysmic event, apparently). But the catch is that much of humanity now lives in cities or settlements that are able to move on wheels.

The main focus here is London, which is dubbed a ‘Predator City’ and has moved into mainland Europe to scour for resources.

That’s superbly showcased in a breath-taking opening sequence that sees London chasing a cluster of much smaller settlements.

It’s here that we meet the key players of the film brought to us by some of the people behind The Lord of The Rings trilogy (including Peter Jackson).

Scarred assassin Hester Shaw (Hera Hilmar) hopes to take down London bigwig Thaddeus Valentine (Hugo Weaving), but is stopped in her tracks by young historian Tom Natsworthy (Robert Sheehan) seconds before she can seal the deal.

That leaves the pair on the run from London, which ultimately has dastardly designs on taking down the peaceful Eastern land of Shan Guo in a bid to strip it of its resources and enslave the people living there.

Anyhow, the main plot follows Hester and Tom – who showcase just how ‘Mad Max’ the rest of the world has gone.

Whether they’re being hunted by Shrike (Stephen Lang) – a half-android, half ghoul killing machine – or teaming up with gun-totting enemy-of-London Anna Fang (Jihae), the action comes thick and fast.

If that all sounds pretty exciting, you’d be half right.

I loved the world building on show here, while you always get the sense that there are more amazing locations that could be showcased in possible sequels (there are four Philip Reeve books to work with).

It’s the characters that fall a little flat, despite a pleasing performance from Hilmar in her first major role.

You will enjoy Lang’s tragic Shrike, too.

Hester aside, the characters just aren’t fleshed out enough; and even her forced chemistry Sheehan’s Tom grates a little, with his arc largely irritating.

Serial bad guy Weaving is always a stellar performer, but you’ll never really understand Thaddeus’ motives either – nor is the reason for his villainous behaviour ever really explored.

If you can see past that, Mortal Engines is a visually stunning offering that could have been very special.

Here’s hoping that a sequel is green lit and the wrongs are righted, as there’s a huge amount of potential in this world.

THE NUTCRACKER & THE FOUR REALMS (PG)
10am (Sat/Sun/Wed/Thu)