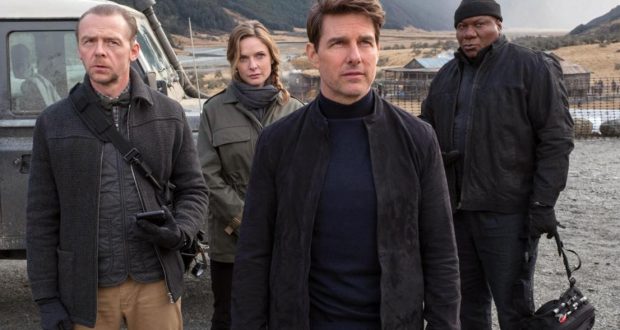 GETTING THE GANG BACK TOGETHER: From left – Simon Pegg, Rebecca Ferguson, Tom Cruise and Ving Rhames in Fallout.

The Mission Impossible films may not be everyone’s cup of tea, but you can’t deny that they’ve found a winning formula over the past two decades (that’s right, it’s 22 years since the original).

If you want to see Tom Cruise’s legendary character Ethan Hunt save the world by pulling off death-defying stunts and catching bad guys, Fallout – the series’ sixth instalment – remains very much up your street.

There’s one key change this time around, however, with Fallout feeling very much like a direct sequel to 2015’s Rogue Nation.

Cruise (of course) is back to headline as Impossible Missions Force (IMF) agent Hunt, while series veterans Luther (Ving Rhames) and Benji (Simon Pegg) are naturally on-board, too.

But Fallout also brings back Rebecca Ferguson’s Ilsa Faust, Alec Baldwin’s Alan Hunley and a memorable villain, as well as the services of director Christopher McQuarrie, from the last slice of Mission Impossible action.

It feels like something of a sequel as a result – and that helps Fallout become a contender for best film of the series so far.

Anyway, as the title would suggest, Hunt and co are fighting to prevent terrorists setting off a nuclear bomb in their latest not-quite-so-impossible mission.

The catch here is that CIA bigwig Erica Sloan (Angela Bassett) isn’t convinced that the IMF are capable of getting the job done – and tasks black ops assassin Agent Walker (Henry Cavill) with tagging along with the tried-and-tested squad.

The team must attempt to hijack a meeting with the intriguing White Widow (Vanessa Kirby) and discover the price they’ll have to pay to get their hands on the plutonium – but find themselves caught up in a web of deceit that could lead to the multiple bombs doing unfathomable damage.

Cruise, as ever, is all-action as Hunt. There are many memorable scenes this time around, including an awesome HALO dive, a brutal bathroom brawl and edge-of-your-seat action on a helicopter.

You sense the mega-star enjoys playing one of his most famous characters – and he delivers the kind of performance you’d expect.

Cavill is a menacing presence through Fallout and works as a solid foil for the main man. He appears to revel in playing something of a shady character and you can forgive a few wooden scenes.

Bringing back Ferguson – easily the best female character in the series – is a masterstroke. She impresses throughout and works well with Cruise once more.

Rhames and Pegg are, of course, solid in roles they play well, but it’s Kirby’s White Widow who will live longest in the memory. She has femme fatale appeal as an underworld power broker and it’d be great to see her reprise her role in the future.

As I said at the start, you know what you’re going to get from the Mission Impossible films.

They operate outside of reality, but deliver thrills and action aplenty. The plot and stunts are far-fetched – but isn’t that why we keep coming back for more?

So, once again, going to the cinema to see Fallout is a mission that you really should accept.