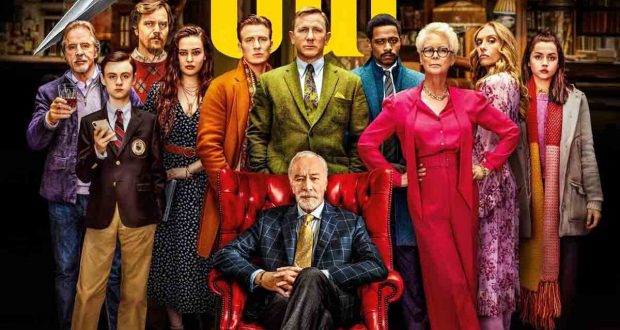 ALL-STAR CAST: The main players in Knives Out.

Given the impressive nature of its cast, Knives Out always looked like being capable of lighting up the pre-Christmas vacuum at the cinema.

A modern murder-mystery helmed by writer/director by Rian Johnson, there’s a lot to admire about a film that is as much of a comedy as it is a ‘whodunnit’ thriller.

The story follows the apparent suicide of multi-millionaire author Harlan Thrombey (Christopher Plummer), who is found dead on the morning after his 85th birthday bash thanks to a seemingly self-inflicted knife wound to the neck.

As a result, cops LaKeith Stanfield and Noah Segan must interview Thrombey’s dysfunctional family – who are all circling his fortune like vultures.

They’re sure that it’s suicide, but famed sleuth Benoit Blanc (Daniel Craig) believes otherwise and takes it upon himself to air the family’s dirty laundry in a bid to get to the bottom of events.

Craig, utilising a strong southern American accent, is at the centre of the film and does deliver one of his best performances to date.

Thrombey’s family – which includes Jamie Lee Curtis, Michael Shannon, Chris Evans, Toni Collette, Don Johnson, Katherine Langford, and Jaeden Martell – all have secrets and all have possible motives for murder, which are played out in an amusing sequence of interrogations.

Also key to the story is Thrombey’s nurse Marta, who is played by the exceptional Ana de Armas.

Much-admired by the family (although they can’t decide which South American country she is native to), she’s very understated and likeable – while also being physically incapable of telling a lie.

It’s hard to delve too much further into the story without serving up sizeable spoilers, but it’s fair to say that the audience is treated to many twists and turns.

You’ll certainly never feel completely confident of guessing the ultimate outcome, even when the film leads you down a seemingly decisive path midway through proceedings.

Although Craig is a dominating presence throughout – and it’d certainly be good to see more Benoit Blanc in the future – there are good performances across the board here.

Evans is the anti-Captain America as a spoiled rich brat with no morals, while Shannon and Curtis are on strong form as Thrombey’s money-grabbing children.

I did enjoy the performance of the increasingly impressive de Armas, too. She had solid chemistry with Craig ahead of starring alongside him in his final outing as James Bond (No Time to Die) next year.

Knives Out does well to stay on the right side of parody throughout its 2.10hrs running time and I certainly feel that there’s something for everyone here.

It’s just a good film starring strong actors on fine form, and is certainly one of the more notable films of the year in its final month.