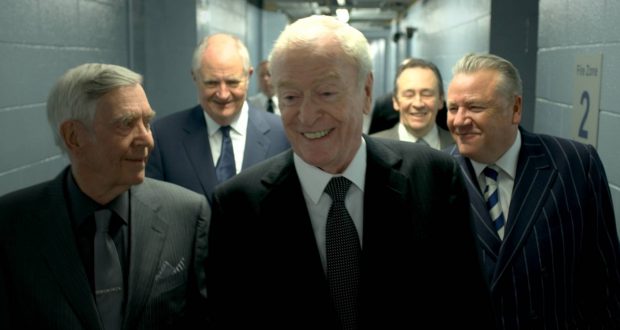 Upon first glance, you could be forgiven for thinking that King Of Thieves is essentially an Ocean’s 11 spin-off featuring a team of pensioners.

The latest film to tell the tale of the 2015 Hatton Garden heist, which saw an eye-watering £14million worth of loot pinched by a gang of golden oldies, certainly does do a good job of capturing the humorous side of the crime.

For the most part, the silver-haired thieves do maintain a lighter tone akin to George Clooney and co, but their menacing ways soon lower the tone – resulting in a heist offering that certainly stands out from the crowd.

The main story focuses on the elderly gang, who clearly made plenty of money by stealing diamonds back in their heyday.

Headed up by 76-year-old Brian Reader (Michael Caine), who is in mourning after the death of his wife, the plan is hatched when young ‘security expert’ Basil (Daredevil himself Charlie Cox) tempts the group back into the robbery game.

The idea of one last big score is too much for Reader to turn his nose up at, so he gets in touch with old running buddies Terry Perkins (Jim Broadbent), Danny Jones (Ray Winstone), John Kenny Collins (Tom Courtenay) and Carl Wood (Paul Whitehouse).

And, for the first half of the film, the banter between the group is great.

Not everything hits the mark, but it’s like an old group of mates getting together and giving each other endless light-hearted grief.

The way the team find their way into the vault is good fun, too. But you’ll soon see the cracks emerging, with Caine oozing steely confidence as both Broadbent and Winstone become increasingly aggressive.

Watch out for the amusing manipulative ways of Courtenay too, while there’s a great cameo from Michael Gambon that makes you wonder just how these guys managed to pull the job off.

It must be said that the chemistry displayed by the best of British is off the scale here, too. You can imagine they had great fun making the film – and that comes through in spades.

It’s when the fun finishes that King Of Thieves does slowly start to lose its way, however.

The change of tone as the film reached its climax does make for something of an uneven offering, but I suppose pulling off such a high-profile job would challenge the boundaries of any friendship.

Among all of the old heads, it’s worth noting that Cox plays a great role here.

If you’re not aware of his part in the plan (I wasn’t), his arc is one of the more enjoyable elements of the entire film.

Clearly a top actor (his stint as Netflix’s Daredevil has been brilliant so far), Cox’s shy nature makes him a fine foil for the Dad’s Army-like gang.

While there have been other films and shows portraying the Hatton Garden heist, it’s fair to say that King Of Thieves is the most high-profile one yet.

It’s far from a classic and it’s big screen appeal isn’t huge. But the all-star cast, led expertly by the always impressive Caine, does bring a sense of gravitas to proceedings.

So, if you want to be entertained by some of Britain’s top acting talents of yesteryear, King Of Thieves is perhaps the film you’ve been looking for.

For more titles and showtimes please visit www.savoyboston.co.uk or call 01205 363634