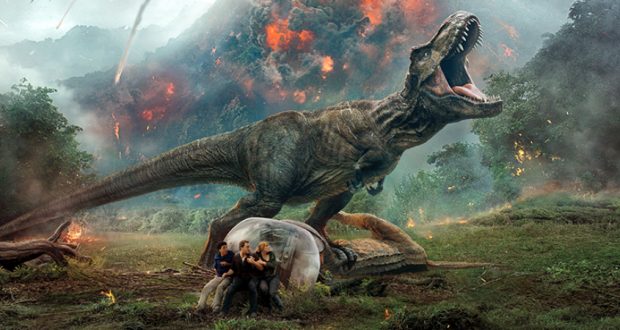 EXPLOSIVE ACTION: It wouldn’t be a Jurassic World film without the series’ legendary T-Rex, who makes another appearance.

I’ll be honest with you from the off; I really enjoyed 2015’s Jurassic World.

Steven Spielberg’s Jurassic Park rates as one of my all-time favourite films, but its direct sequels never really captured the magic of the original.

I think Jurassic World succeeded because it managed to capture the magic of the first film in the series, but I must admit to being a little sceptical about Fallen Kingdom for the same reasons mentioned above.

It’s certainly a direct sequel, with the story moving on three years after the climax of the Colin Trevorrow-directed original.

The dinosaurs have been left alone on Isla Nublar, but are facing another extinction event due to an impending volcano eruption.

Should humanity step in and save the creatures? Or is it a sign that they are simply meant to be extinct?

That’s the key question being asked by the powers that be in Fallen Kingdom, but you can also rest assured that more sinister motives are in play (a seed planted in Jurassic World) with regard to how dinosaurs could be deployed in the wider world.

Anyhow, the story contrives a way to bring Bryce Dallas Howard’s Claire Dearing and Chris Pratt’s Owen Grady – who are no longer an item – back together and plots them a course for what remains of Jurassic World.

They’re bidding to save as many species of dinosaur as they can before the volcano goes boom, but naturally things don’t quite go as they expect.

Accompanying them are paleo-vet Zia Rodriguez (Daniella Pineda) and tech geek Franklin (Justice Smith), while a team of heavies – led by Ted Levine’s Ken Wheatley – are their support.

I’ll not go into too much detail regarding the rest of the story, but it’s fair to say that the stakes are very different this time around.

What was a high-stakes disaster offering veers very much into the horror genre, making for some surprisingly spine-chilling scenes.

Pratt and Dallas Howard get the most screen time, which their relationship still feeling a little underexplored.

Naturally, both play their roles well and their presence guarantees extra gravitas.

Naturally, though, the highlights come from the dinosaurs. They look better than ever – and the effects used on the island are very impressive on the big screen.

I’d include the opening sequence in that, which is perhaps one of the most eye-catching of the year so far.

Does Fallen Kingdom live up to its predecessor? Not quite. But what I will say is that it’s a vast improvement on how Jurassic Park was followed up, way back when.

There are obvious flaws and plenty of cliched moments here, but director JA Bayona’s offering certainly sets up an interesting scenario for a potential third film in the series.

It’s also a big film that is best seen on the big screen.