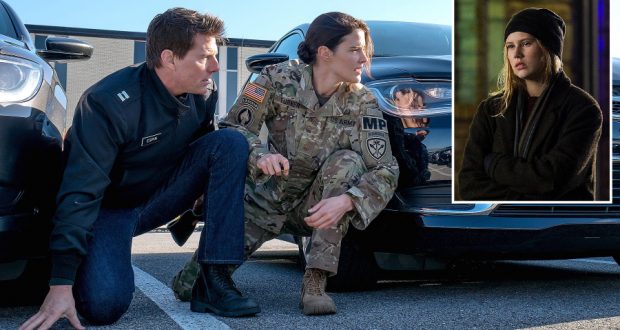 It didn’t receive the greatest critical acclaim, but I thought the 2012 Jack Reacher original was a pretty solid action offering.

There was absolutely nothing that we hadn’t seen Jack Bauer, Jason Bourne or James Bond (what is it with action heroes with names beginning with J) do before, but Tom Cruise managed to make the character one that I was bothered about.

However, from the very first trailer I saw for Jack Reacher’s second outing – Never Go Back – I suspected it was going to be a largely generic offering.

And, sadly, that’s pretty much what we’re served up by director Edward Zwick (The Last Samurai).

It appears that nothing much has changed with Cruise’s Reacher, who remains a drifter operating in the shadows.

He is, at least, back on the grid now – well, if you include the odd phone call to female military leader Major Turner (Cobie Smulders – Avengers: Age of Ultron), that is.

The pair arrange to have a drink after Reacher serves up a few corrupt cops to her early on – but when he finally arrives in Washington DC to seal the deal, Turner has been locked up under dubious circumstances.

Naturally, Reacher smells conspiracy and sets about breaking her out of the military facility in a bid to clear her name and restore Turner to her lofty position.

However, his plan to serve justice unearths the possibility that he has a 15-year-old daughter called Samantha (Danika Yarosh – Heroes Reborn). And, of course, that puts her in the firing line too.

Without wishing to spoil any more, the majority of the plot sees the trio on the run from highly-trained specialists – and sees them visit New Orleans (a nice change from the usual New York/LA/San Francisco locations).

Plenty of fight scenes, strong action sequences and hit and miss one-liners ensue, which is – in essence – exactly what I was expecting from Never Go Back.

Cruise has portrayed so many memorable characters in the genre, be it Ethan Hunt in Mission: Impossible, Maverick in Top Gun or Cage in the surprisingly awesome Edge of Tomorrow.

Although the arrogance of Reacher makes him tough to like, Cruise does have the uncanny knack of making these kind of characters endearing.

The same can’t really be said about Smulders, however. An actress I really like, her Major Turner should have been given much more to do. Instead, she feels benched at key moments – a notion her character even brings up at one point.

Young Yarosh is a breath of fresh air as Samantha, though, proving she’s ready for the big screen after a solid turn as Malina in TV series Heroes Reborn.

Sadly, her character conforms to the teenage girl stereotype in this kind of movie, which is disappointing (see also Kim Bauer).

Despite the best efforts of the leading trio – and a few solid bad guys (including Prison Break’s Robert Knepper), Never Go Back doesn’t surpass the original and badly fails to stand out in a crowded genre.

If you have an action itch to scratch, it’s a decent popcorn fare but the ridiculous story and generic plot very much hold Cruise and co back this time around. Never Go

Back? Cruise may end up feeling that way too…