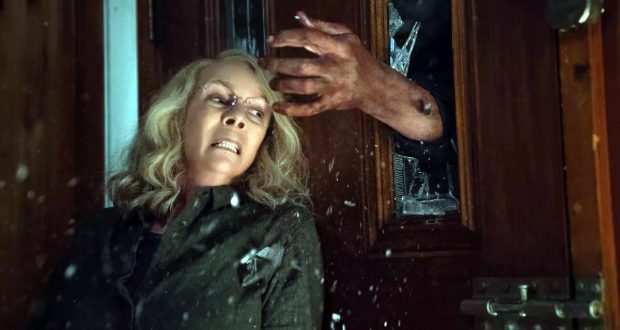 40 YEARS IN THE MAKING: Jamie Lee Curtis returns as Laurie Strode in the excellent Halloween sequel.

It’s fair to say that fans of the original Halloween movie have been waiting 40 years for a genuine sequel.

The string of follow-ups to John Carpenter’s original – including the largely rubbish Halloween H20 back in 1998 – never got close to the lofty heights of the 1978 classic.

However, this David Gordon Green-directed offering serves as a direct sequel – and ignores the very existence of any films made in between.

It’s important that Jamie Lee Curtis returns as Laurie Strode, who is something of a recluse having survived deranged serial killer Michael Myers (Nick Castle) in the original.

She’s spent the last 40 years preparing herself for Myers’ inevitable return – at the cost of her relationship with daughter Karen (Judy Greer) and, to a lesser extent, granddaughter Allyson (Andi Matichak).

Laurie is paranoid, security-conscious and knows how to handle pretty much every firearm you could imagine. She’s also built a bunker under her property, with the original Haddonfield incident fully-consuming her.

Naturally, her fears are realised when Myers manages to escape custody – on the eve of Halloween no less – and is free to take a knife to the oblivious natives on a night when his trademark mask allows him the blend into the crowd.

Of course, Myers is drawn to the three generations of Strode women. But there is ample build-up, with a host a gruesome kills and attacks creating the tension perfectly.

Indeed, anybody that could or would be able to intervene or sound the alarm is on a collision course with the merciless killer – with largely gruesome results.

If you consider that the original film propelled Curtis into stardom, it’s perhaps fitting that her reprisal of the role also marks a real return to form for her on a personal level, too.

She’s a complex character who has no qualms with the fractured relationship she has with her family, providing they are safe from the ‘bogeyman’.

Coming face-to-face with Myers, who is an intimidating presence throughout, feels like her destiny – and she’ll not rest until he’s dead.

Greer gets less screen time as Karen, who has turned her back on her mother in a bid to see the good in the world. Their relationship is complex and at the very core of the film.

Matichak is somewhere in the middle of the pair and succeeds in not being an annoying teenage actor in this kind of environment.

There are a number of other solid performances throughout – including Will Patton as Officer Hawkins.

Some characters will frustrate you as they try to get under Myers’ skin, but they serve a good purpose in the grand scheme of things.

Halloween is also accessible for those who haven’t seen the original, making it very easy to recommend.

So, if you want to scratch your horror itch, get yourself to the cinema.

Voice Verdict: 8.5/10 (reviewed at Boston West End Cinema)
+ Suitably brutal
+ Builds up the tension well
+ A real return to form for Curtis
+ Myers is as imposing as ever