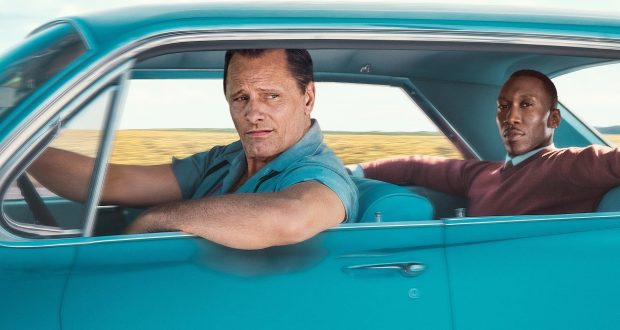 Green Book is one of those films that makes you shudder at the state of the supposedly civilised world in the not so distant past.

Set in 1960s America, it’s the true story of Tony Vallelonga (Lip to his friends) and celebrated pianist Dr Don Shirley and how two people from very different backgrounds bonded during the latter’s multi-city tour of the (very racist) south of the nation.

The eight-week pre-Christmas tour is essentially a buddy movie with a very serious message, which Viggo Mortensen and Mahershala Ali play out perfectly as Lip and Shirley respectively.

Anyhow, the pair come together when Dr Shirley goes on the look-out for a driver for his tour.

With Lip out of work due to the Copacabana nightclub he worked at being closed, he’s forced to take on the role of chauffeuring the musician around and watching his back for the entirety of the tour.

That is at odds with what the viewer knows about the working class Italian-American Lip, given that his seemingly racist views are highlighted quite early on in the 2.10hrs Peter Farrelly-directed offering.

Anyhow, the pair set off on tour together and soon spark up a relationship that includes plenty of bickering, a fair bit of bonding and plenty of eating (Lip, in particular, has an insatiable appetite).

Both men have a lot to learn about racism and about each other, with each harbouring seemingly unhealthy views on the subject.

But they come together when faced with harrowing displays of racism, corrupt police officers and dreadful business owners that are happy to pay Dr Shirley for his time, but refuse to allow him to use their toilet or share a dining room with them.

It’s gut-wrenching stuff, but a sad reflection of 1960s America.

Beautifully shot and expertly acted by an on-song Mortensen and Ali, there’s plenty to enjoy here despite the heinous actions depicted.

Mortensen, who must have enjoyed demolishing a never-ending supply of food while filming the movie, is superb as Lip.

It rankles that his early racist views were either ignored or brushed under the carpet, but other than that his character is an everyman that we can all relate too.

Ali, meanwhile, impresses in a very different role as a sophisticated – but very judgemental – musician who was keen to break down barriers, but became very lonely in the process.

Both are at the top of their game here and help Green Book deliver its message successfully.

There are some questionable moments if you scratch a little bit further beneath the surface, but I enjoyed this way more than I thought I would.

For the performances alone, Green Book is worth your time. It does whiff a little of Oscar-season bait (five nominations), but it’s an enjoyable watch.