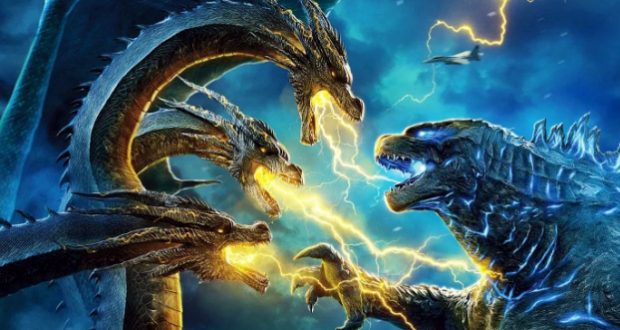 MONSTER-OFF! Godzilla (right) and King Ghidorah have a number of titanic tussles in King Of The Monsters.

Film review: Godzilla – King Of The Monsters (12A)

When you think of the best monster movies over the years, they usually take a ‘less is more’ approach when it comes to showing off the main event.

Consider how little you actually see the shark in Jaws or the T-Rex in Jurassic Park and you realise that their main purpose is to be a menacing undercurrent more than the actual main event.

The very enjoyable Godzilla reboot took a similar approach in 2014, but it’s fair to say that King Of The Monsters goes in almost exactly the opposite direction, putting the titanic kaijus front and centre.

It’s a truly remarkable feat to bring Godzilla, Mothra, Rodan and the evil King Ghidorah to life on the big screen in such amazing detail, making King Of The Monsters a must-see event at the cinema.

It is, however, a good job that the titans deliver a show-stopper of a performance, given that the humans aren’t on the best of form.

There are no surprises with the way this Godzilla sequel plays out, given the groundwork Legendary Pictures and Warner Bros have put in to creating their so-called ‘MonsterVerse’.

Once again, the secretive scientific agency Monarch (you’ll have seen them in the original and Skull Island) are attempting to deal with the threat of Godzilla and his like.

Now dubbed “Titans” by a world fully aware that monsters live among them, Monarch is monitoring the beasts at various locations throughout the world.

We see the story through the eyes of Mark Russell (Kyle Chandler), Dr Emma Russell (Vera Farmiga) and their daughter Madison (Millie Bobby Brown), who are somewhat splintered after living through the disaster of the first film.

It’s fair to say that Mark is in a permanent grump for most of the story, while Emma has a bizarre arc that is quite difficult to comprehend.

As for Madison, they certainly wasted the talents of Brown, too.

It’s not a total bust on the character front, though, with the excellent Ken Watanabe returning as Dr Ishiro Serizawa. He’s Godzilla’s number one fan and enjoys one of the film’s stand-out scenes along the way.

Charles Dance also has a sizeable role to play in the plot, but does disappear in the final act.

But who am I kidding, it’s all about the monsters here.

With a number of them on the loose and wreaking havoc across the globe, it’s left for Godzilla to return to his new role as defender of the planet.

He’s involved in numerous tussles with his fellow kaijus, which play out incredibly.

The level of detail is superb and the battles – including the explosive final act – play out perfectly if you’re a fan of the genre.

If you can forgive the generic human angle, King Of The Monsters is pretty much the gold standard when it comes to this kind of film.

It’s also loaded with Easter Eggs for fans of both the old school Godzilla material and those who have invested their time in the MonsterVerse.

Clearly teasing the upcoming Godzilla vs Kong film that is slated for next year, there’s also much to be excited about moving forward.

While King Of The Monsters is far from a cinematic marvel, it’s a technically superb crowd pleaser that stands tall.