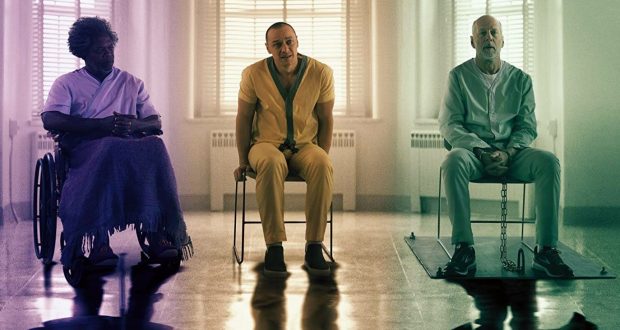 Ever since that tease at the end of Split, it’s fair to say that Glass is a film there was a sizeable clamour for.

Seeing Bruce Willis’ David Dunn make an appearance at the end of the well-received 2016 hit was a pleasant surprise, some 19 years after the success of Unbreakable.

Dubbed the The Eastrail 177 Trilogy, Glass is the conclusion of M. Night Shyamalan’s story by bringing the respective narratives of Unbreakable and Split together.

A film loaded with secrets and twists, it’s a difficult one to review without giving away the key moments that define it. But it’s fair to say that Glass is the weakest of the series by some way, which is a massive shame.

Anyway, the movie gets under way by reintroducing us to Dunn, who is continuing down his vigilante path and has been dubbed ‘The Overseer’ by his many YouTube fans.

Still blessed with super strength and ‘unbreakable’ bones, he’s working alongside a familiar face but isn’t really taking on anybody all that formidable.

That changes in the wake of Split, with Dunn on the look out for James McAvoy’s Kevin Wendell Crumb – who has once again captured a group of young girls as he bids to summon ‘The Beast’, who is the most destructive of his 24 personalities.

It’s a believable way to put the two characters on a collision course and the two do share a number of memorable scenes together.

Heavily-medicated in a medical facility, he naturally has a major role to play in the wider story – but you never really get the sense that he’s the main player in proceedings.

Anyhow, his long-standing belief that super-hero type characters exist is further perked by Crumb’s existence and he does his best to stir the pot.

His ultimate goal is for the world to come around to his way of thinking, something that does drop an anchor on the natural pacing of the plot.

All three do come together at certain parts of the film, but it often does feel forced when they do.

McAvoy is the star turn here, producing another big, over-the-top performance like his stand-out showing in Split. He effortlessly switches personalities once more, which is as eerie as it was in his origin story.

Anya Taylor-Joy’s Casey Cooke (the lone survivor of his horde of personalities in the original) also makes a welcome return, which adds to his evolution as a character.

Working out of the medical facility where Glass is based, she has a big role to play as the big guns collide.

It’s hard to pinpoint what exactly goes wrong with Glass as a film. It’s pleasing in parts and threatens to build on the success of what came before it.

But a stuttering final act, which serves up some questionable decisions, leaves something of a sour taste in the mouth.

Other threads are ignored or glazed over too, leaving you with a sense of what might have been as you leave the cinema.

In short, Glass is more solid than spectacular.