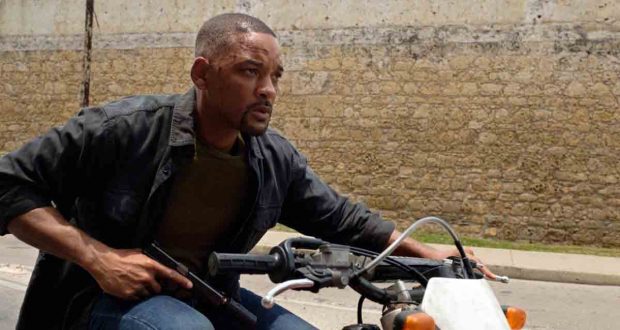 HUNTED: Will Smith is chased by a younger version of himself in Gemini Man.

Every now and then, a film comes along that is able to impressively showcase a new kind of technology.

I remember being wowed by The Matrix’s use of Bullet Time and Avatar showing the rest how 3D should be done after their releases.

Gemini Man may not be as good as those two classics, but it does a fine job of showing how cinema is now able to digitally de-age somebody on the big screen.

Let me say this first; Ang Lee’s action blockbuster starring Will Smith (or should I say two Will Smiths?) isn’t going to blow your mind story-wise.

But it’s nowhere near as bad as some of the reviews I’ve seen will have you believe.

Sure, you’ve seen this kind of story before. But seeing a remarkable digital version of Smith’s young face (think Fresh Prince era) hunt down the class of 2019 is truly a sight to behold.

For that spectacle alone, Gemini Man deserves to be seen on the big screen.

I wasn’t even able to see it in its best form (3D and 120fps) so I’d imagine that would have blown my mind.

As for the plot, it follows former soldier turned government gun for hire Henry Brogan (Smith) who decides to retire from the game after an exhilarating opening sequence that involves a train assassination.

Naturally, the powers that be (including Clive Owen as a stereotypical passive-aggressive suit) won’t allow him to go quietly and he’s forced to get to the bottom of just why they want him dead.

With Mary Elizabeth Winstead’s academy agent Danny and Henry’s friend Baron (Benedict Wong) caught up in his mission, there are plenty of action sequences to marvel at.

But the ante goes up when Owen’s Clay Verris unleashes his prized asset on Brogan – and young clone of himself called Junior.

Watching Smith play both roles as the pair slug it out in scenes that will remind you of the Jason Bourne films was the obvious highlight of the film and will probably go down in cinematic history.

Sure, things head towards a largely generic finale and you could probably predict the plot before heading into the cinema.

But it feels like a film you should see on the big screen, just for the technology.

Smith, as always is a strong lead. He’s perhaps not as comedic as usual here, while his younger clone has some obvious emotional issues that he deals with well.

I also enjoyed Winstead as the lead female. I was fan of her work in Fargo and her stock looks set to skyrocket in the coming years with Birds of Prey on the horizon.

Wong also plays a good hand as ever, but Owen and the other government types are a little on the nose.

Despite its obvious shortcomings, Gemini Man is still a lot of fun and is sure to scratch your action itch while also showing you a glimpse of the future of cinema.