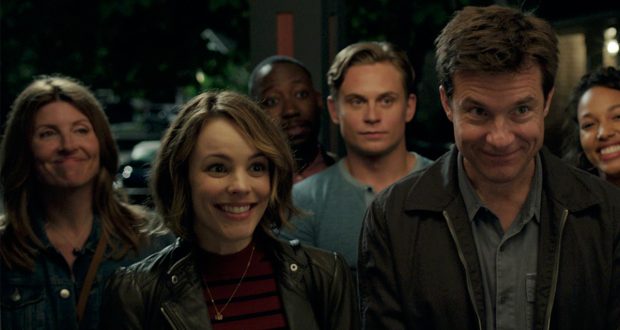 Let’s be honest, we all like games – especially if you’re the competitive sort.

Getting together with your friends and challenging them to some sort of competition is a notion that will resonate with almost everyone.

And, at its core, that’s what Game Night is all about.

The story follows Annie (Rachel McAdams) and Max (Jason Bateman), who star as two uber-competitive people who fall in love with each other become an even more competitive couple.

They regularly host a game night with their best mates Michelle and Kevin (Kylie Bunbury and Lamorne Morris), who are happily married, and Ryan (Billy Magnussen), who brings along a different girl each week.

However, their next-door neighbour Gary (Jesse Plemons), who used to be part of the group but, is frozen out for, well, being a little bit on the odd side.

The larger plot kicks in when Max’s older brother Brooks (Kyle Chandler) arrives in town and flaunts his obvious riches under the nose of his brother.

Not impressed by Max’s small-time games of Scrabble and charades, he offers to host a bigger and better game night at his luxury pad.

He organises a live action murder mystery game that would see Brooks kidnapped and the other teams (Ryan is joined by Sharon Horgan’s Sarah) attempt to find him.

But, unbeknown to them, Brooks is actually kidnapped by a group of genuine criminals and the stakes of the game change massively.

That makes for some pretty humorous situations, as the group don’t realise that their lives are genuinely in danger when they’re aiming to track Brooks down.

And, with all of them as competitive as each other, you can bet that they get themselves into deep trouble.

Directors John Francis Daley and Jonathan Goldstein do deliver plenty of laughs here, including a stand-out scene when Annie goes full Pulp Fiction on a group of thugs in a bar.

But, as well as gaming, Game Night is about friendship and family. It’s refreshing that the characters actually like each other and they are plenty of humorous side plots on the go throughout the 1.40hrs running time.

As always, McAdams and Batemen are on strong form as the lead characters.

Both are strong actors and they play off each other well, with McAdams in particular stealing the show a little.

They are rivalled by Plemons, though. He’s sidelined for much of the film, but does play a very funny role – especially in the end credits.

Chandler does a solid job as Brooks, too, although his character is the least likeable of the bunch.

I did enjoy the banter between Bunbury and Morris’ Michelle and Kevin too, while Magnussen’s Ryan does have some strong scenes with the excellent Horgan.

However, I’m not going to pretend that Game Night is a classic.

It’s a refreshing idea that is well executed with some funny moments, but you could maybe hope for a few more laughs as the film ventures into quite ridiculous territory late on.

It’s easy viewing at the cinema, though, and those watching with me at Boston’s West End Cinema did seem entertained – so it’s certainly worth your time.