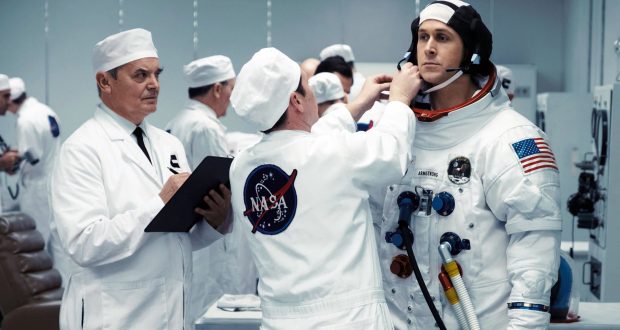 FLY ME TO THE MOON: Ryan Gosling (right) suits up as Neil Armstrong, prior to the Moon landing, in First Man.

Landing on the Moon is perhaps the most impressive achievement the human race has managed in all of history.

To think that two men were able to walk on the moon is beyond the comprehension of most people – and the fact mankind hasn’t been back for nearly 50 years suggests that it’s a mighty tough task.

You’d think, then, that First Man would feel like a celebration of that remarkable feat.

Nope. First Man, which tells the story of Neil Armstrong being the first man to set foot on the Moon, plays with your emotions in a much different way.

Directed by Damien Chazelle (La La Land) and based on James R Hansen’s book of the same name, Armstrong’s story is one of sacrifice and heartbreak. But, for him, it’s a simple case of going to work.

Expertly portrayed by Ryan Gosling, it’s fair to say that you’ll never really get to know NASA’s most famous astronaut. Whether that hinders your verdict on the film is perhaps a more personal choice than with most other films.

Badly hit by the death of his two-year-old daughter Karen, Armstrong – the most private of men – makes the choice to sign up for the Gemini and Apollo missions as a coping mechanism for his grief.

Cold towards his family – including wife Janet (Claire Foy) – his aim of reaching the Moon keeps his mind off the obvious anguish he harbours inside.

As a father of a young girl that has severe problems myself, it was a notion that very much resonated with me.

Anyway, we dip in and out of his life from 1961 up until the actual Moon landing in 1969, with NASA’s many successes and failures taking centre stage.

We’re placed in intimate settings with Armstrong and Co, much like Christopher Nolan’s Dunkirk. From the claustrophobic cockpits to emotional funerals, we really do see every aspect of what it took to be an astronaut.

That extends to Foy’s powerhouse performance as Janet, a wife that just wants her husband to be there for her and their two children.

With Gosling forced to play a withdrawn personality, her raw emotion allows her to steal many a scene – and the pair both nail their performances.

It’d be remiss not to mention the Moon landing in greater detail, as it’s a truly remarkable scene.

Shot perfectly, it celebrates the enormity of the achievement and will immerse you in a truly breath-taking manner.

As touched upon earlier, you’ll perhaps leave the cinema feeling like you wanted more from Armstrong on a personal level.

But you’ll certainly understand his motives and feel great sympathy for a man that you perhaps expected to be celebrating.

In short, First Man is a great experience at the cinema and comfortably one of the films of the year.

A must see on the big screen.