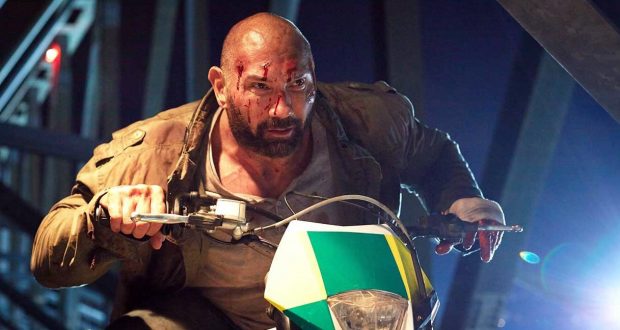 There’s something of an art to making a film be both pretty rubbish and very entertaining at the same time.

Growing up, I remember loving the now cult classic Starship Troopers, despite recognising that it had a lot of obvious flaws.

While I can’t say that I felt the same warmth to the quite frankly ridiculous Final Score, it does come close to reaching that sweet spot.

Let’s be honest straight out of the trap; I watched the Sky Cinema Original Film in the comfort of my own living room, so it didn’t have that same big screen appeal.

Anyway, Final Score stars former WWE wrestler Dave Bautista – Drax from Marvel’s Guardians Of The Galaxy – as Michael Knox, a former soldier who is in London to take the daughter of a fallen colleague to a football game.

And not just any football game, but West Ham United versus the fictional Dynamo in (wait for it) the semi-final of the Champions League at their former Upton Park home.And, if the notion of West Ham being in the latter stages of a Europe’s flagship competition isn’t funny enough, wait for the rest.

A group from Russian breakaway nation Sokovia (bizarrely, the same fictional country used in Avengers: Age of UItron) have rigged the stadium to blow and cut off its communications with the outside world.

Their aim is to track down exiled eastern European revolutionary Dimitri (Pierce Brosnan), who they believe is being harboured by the British government. Dimitri’s brother Arkady (Ray Stevenson) has no problem with killing everyone in the stadium if it means getting to his sibling – but he didn’t bank on Knox, who plays the role of one-man army.

In fairness, the plot is sound enough – and the story, at its core, is compelling and entertaining enough to hold your attention.

Bautista is also very watchable as the lead, which took me a little by surprise.

There are some unintentionally hilarious moments, though. I really want to tell you about the cameos by ex-footballers Tony Cottee and Rufus Brevett, but that’d spoil the surprise.

It’s also hard to believe that 30,000 football fans would watch on oblivious while the stadium comes under fire from a helicopter, or totally miss a man riding a motorbike from the roof of one stand onto the other.

If you can forgive that, Brosnan’s horrific Russian accent and the dreadful scenes involving match action – there is plenty of fun to be had with this B-list action fare.

The action is very watchable, making the lofty comparisons of ‘Die Hard in a football ground’ not too far fetched.

As you can watch this one on Sky, I’d recommend giving it a go – especially if you’re a football fan.

But certainly don’t waste your dosh at the cinema.