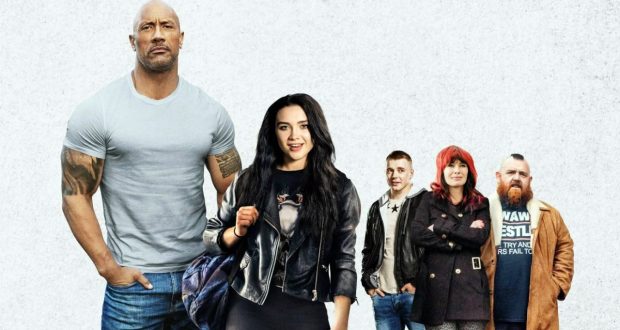 Film review: Fighting With My Family (12A)

As rags-to-riches stories go, the tale of WWE superstar Paige is one of the more intriguing ones I’ve seen.

I have plenty of knowledge of the wrestling industry and was aware that British wrestler Paige, real name Saraya-Jade Bevis, originated from the Norwich wrestling scene.

But seeing her story on the big screen was a genuine delight – and one that can easily be enjoyed by people who have no interest in wrestling whatsoever.

Written and directed by Stephen Merchant, with a little help from WWE legend Dwayne “The Rock” Johnson, there’s something very British about Fighting With My Family (despite it being a WWE Studios film).

We meet Saraya/Paige (Florence Pugh) during her youth, which was mostly spent inside the squared circle representing family business World Association of Wrestling.

Run by her dad Ricky (Nick Frost) and mother Julia (Lena Headey), she goes toe-to-toe with her brother Zak (Jack Lowden) and anybody else willing to put their body on the line at a local level.

It’s the kind of organisation were the performers can expect to take a bowling ball in the nether regions for an extra £20, but Saraya and Zak both harbour dreams of making it to the WWE in America.

That chance comes when Vince Vaughn’s fictional character Hutch is impressed with their wrestling tapes and offers them a trial when flagship TV show SmackDown arrives at London’s O2 Arena.

I’ll not spoil too much of what happens next, but seeing Saraya become Paige and watching the trials and tribulations she faces on the road to becoming a fully fledged WWE superstar is great cinema.

With laughs a plenty, emotional gut-punches and an uplifting story, the plot is maybe a little bit formulaic – but you’ll forgive Fighting With My Family its shortcomings.

The charming Pugh is amazingly likeable in the lead role, while the Norwich element of proceedings keeps the humour flowing, ensuring that the film never feels like it overstays its welcome.

Sure, the wrestling heavy scenes may not please those uneducated in wrestling’s ways, but it felt very accessible to all upon first viewing.

While Pugh is the obvious star, Frost and Headey are also excellent as her parents, while Lowden’s Zak has a sizeable storyline that really pays-off well in the end.

I also enjoyed Vaughn’s role here. Wrestling is a very tough business to crack and he helps show just how hard it is for local-level talent to break the glass ceiling.

Sure, the timeline of Paige’s rise is condensed for dramatic effect, but the film follows her path accurately.

With The Rock playing himself in a few memorable scenes too, there’s so much to enjoy here.

For wrestling fans, this is comfortably the best film I’ve seen about the industry and I lapped it up.

For non-fans, the wrestling element shouldn’t put you off.

This is one of the best films of the year so far and easily the best WWE Studios offering to date.

Voice Verdict: 9/10 (reviewed at Boston Savoy)
+ Great performances
+ Uplifting story full of humour
+ Accessible to all
– May be a little wrestling heavy