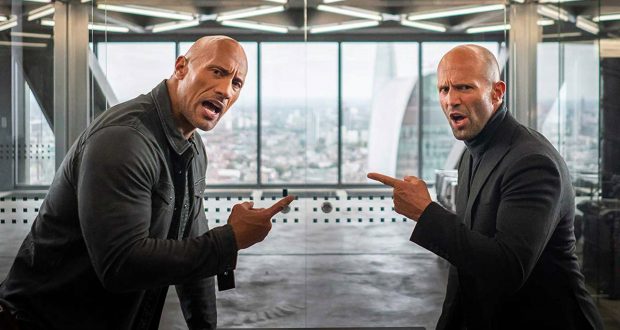 FRENEMIES: Dwayne 'The Rock' Johnson and Jason Statham in Hobbs and Shaw.

By now, you’re all probably aware of The Fast and Furious franchise.

It all started way back in 2001 with a film about fast cars, friendship and family.

Fast forward 18 years and the ninth film, the Hobbs and Shaw spin-off, sees the series reach the point where absolutely anything goes.

With the emphasis on street racing and fast cars almost non-existent here, Hobbs and Shaw is more of an action comedy that – like the more recent installments – doesn’t take itself all that seriously despite the stakes being very high.

For the uninitiated, this spin-off pulls two big players away from the main storyline and throws them into an uncomfortable alliance.

Dwayne “The Rock” Johnson’s Luke Hobbs has been a mainstay of the series since Fast Five, while Jason Statham’s Deckard Shaw completes his journey from Furious Seven villain to likeable anti-hero after his strong turn in The Fate of The Furious.

Despite being partners of sorts last time out, there’s no love lost between Hobbs and Shaw as we link back up with them.

But, when Hobbs’ MI6 sister Hattie (the bad-ass Vanessa Kirby) gets on the wrong side of Idris Elba’s ‘black Superman’ villain Brixton Lore, the pair are thrown together to try and save her and stop a cliched ‘virus that will wipe out the world’ scenario from playing out.

Packed full of action sequences in locations such as London and Samoa (well, Hawaii actually), the core values of the Fast franchise are very much on show.

Stunts that defy reality, characters that break the rules of gravity and survive the impossible are the order of the day, while Johnson and Statham spend half of the film abusing each other with the kind of jokes you’d expect from two alpha males.

Their chemistry is great, but the banter does get a little tiresome on occasion.

Likewise, Elba’s Brixton is a largely generic villain who hangs around a little too long, with each act finding a way to bring him back for more.

The real star turn is played by Kirby, who steals every scene she’s in.

A new addition to the series, it’d be great to see more of her in the role.

There are also a couple of high-profile cameos that I won’t spoil for you, while plenty of groundwork is laid for a possible sequel.

If you like the Hobbs and Shaw characters from the Fast films, you’ll certainly enjoy this spin-off.

Sure, it’s not quite as exciting or car centric as the originals, but it certainly feels like part of the series.

For newbies, you could easily watch this without any prior knowledge, but you’ll miss out on plenty if in-jokes.

As ever, the key here is to leave your brain at the door.

In brief, Hobbs and Shaw has numerous faults and is a largely cheesy action offering, but it’s a great popcorn fare on the big screen.